ThunderCats game to be released this summer for Nintendo DS!

Naruto: Ninja Council developer Aspect Digital have created a side-scrolling ThunderCats action game for the Nintendo DS based on the new cartoon series.

Thundercats picks up at the very beginning of the story with the Lizard army advancing on Thundera. King Claudus, Grune, and Tygra have all gone off to fight, leaving Lion-O behind. Just when it seems like the forces of good are about to prevail, Grune defects. Lion-O, armed with the Sword of Omens, runs into battle and that’s when you begin to kick lizard tail.

Thundercats is going to be very closely tied to the cartoon, a Namco Bandai representative explained. Aspect Digital included sound effects and voice acting from the Warner Bros. series into the game. Concept art has also been added in as an extra reward for players, so they can see how the animation team decided on the final character designs. 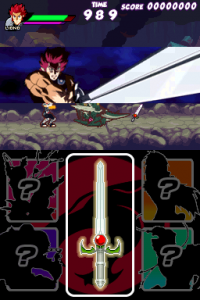 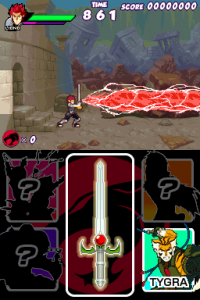 So, why is Thundercats on the Nintendo DS instead of the 3DS? The representative explained the companies involved are aware of the current economic climate and know many parents, who would probably be buying Thundercats for their kids, might not be able to afford a 3DS. There’s a better chance of their children already owning a DS, which would mean they wouldn’t have to worry about getting a whole new system for a game. Plus, people who are fortunate to own a 3DS can still enjoy Thundercats due to backwards compatibility.

You’ll be able to shout, “Thundercats, ho!” and fight “huge robot battles” when you play Thundercats in August.

*The above article contains excerpts from Siliconera.com, please be sure to click the above link to view the full article as well as screenshots from the game!*

For a preview video of the game, be sure to visit: gamepreviews.com!

To see what other fans are saying about this game and discuss it’s release, be sure to visit our forums here!