Panini ThunderCats magazine issue 11 to be the final issue!

The final issue for Panini’s ThunderCats magazine will be issue 11, which should be available from newsagents on 10th January 2013. Fans familiar with the magazine up til now, will know that the comic strip was dropped in December last year, with issue 10 only including activities and puzzles. Many folks were wondering how much longer the magazine would run for, especially with the new ThunderCats seemingly winding down in the UK with many of the Bandai toys on clearance at places like Home Bargains.

The final issue was meant to include a free Thundertank toy, but it’s unknown if this anticipated toy will be included…. Many thanks to forum member starrcade89 for bringing this news to our attention.

Check out our forums here to join the discussion of this unfortunate, but much expected news: ThunderCats UK magazine discussion

Pictured, ThunderCats Issue 10 (first not to include comic) 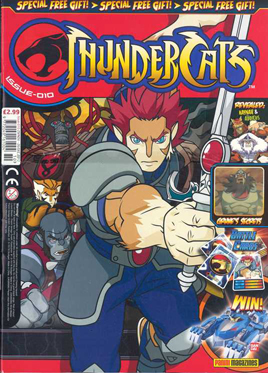