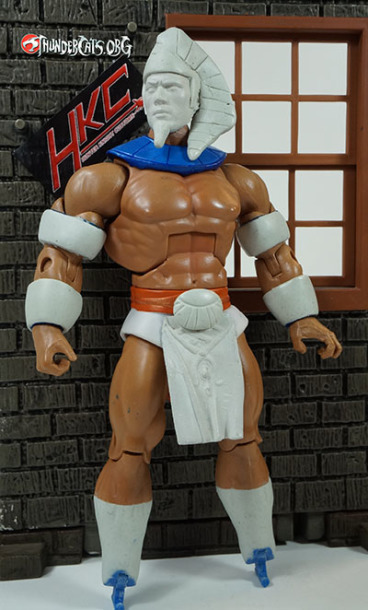 I’m very pleased to share this work in progress update of a very special commission that Hunter Knight Customs (HKC) is creating for the ThunderCats Museum. Chris Diaz, owner of HKC is a big ThunderCats fan and when I contacted him to tell him about the Museum and our desire to assemble some of the very best examples of expert custom figures, he was delighted to donate one of his creations.

We discussed a number of possibilities for a custom figure, and as both Chris and I are fans of Egyptian motifs, Wizz-Ra appealed to us. Although the character only appears in one episode (Dimension Doom), he nevertheless left an indelible impression on the series. His flashback battle with Mumm-Ra was one of the rare glimpses we got into Third Earth’s past and the romantic connection he has with Cheetara was memorable also.

We also wanted to create a figure that was never part of the LJN line-up, and we know there are amazing design possibilities in the ThunderCats line-up that go way beyond the main cast. I asked Chris to work within the format of the MOTUC (Masters of the Universe Classics) that is so popular with ThunderCats collectors, and this opened up an immediate opportunity for the base figure. Fans of the He-Man property will be familiar with Nepthu, a pharaoh themed baddy. He was the perfect base to work from given the obviously similar design that was inspired by a previous DC character.

Next, Chris scoured his sources for a suitable head to work from and chose the WWE Elite Rock which is a brilliant fit. He’s doing a detailed custom and is modifying the face and creating a number of parts and features by hand, to match the cartoon design. I’m really jazzed by the progress Chris has already made and we look forward to adding this terrific piece to the Museum’s collection. We’ll share future updates here so you can watch the progress.

Chris is very busy at the moment but he is still accepting commissions. If you’re interested in engaging Hunter Knight Customs, you can use this link or you can watch their ebay listings.