As previously reported here we have high hopes that Mezco Toyz, who holds the licensing rights to do ThunderCats figures in their One:12 Collective scale (roughly 6 inch) will produce a line. At their Toy Fair preview and during our interview they wouldn’t confirm plans for the brand in this scale, but did say that they would love to create more ThunderCats figures. We are now reporting two reasons why we think these plans are further along than we’ve been told so far.

The first reason is this “Brand Sheet” for the One:12 Collective line. This is a tease or preview of the brands that Mezco plans to release figures for in this scale. It was seen at the Feb 6th preview by Travis of PopVinyls.com but wasn’t reported elsewhere and wasn’t commented on by the Mezco staff. We can clearly see that ThunderCats is included in the group of properties slated for the One:12 Collective line. 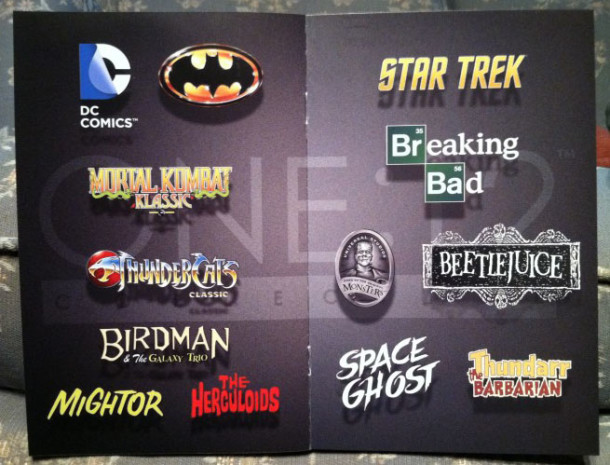 The second reason we believe ThunderCats is on its way in the coveted 6 inch scale is that when we contacted Mezco for our interview prior to Toy Fair, we were connected with Pierre Kalenzaga, whose title is Project Manager, and who is assigned to the One:12 Collective scale. Now the team at Mezco wear many different hats and help on various brands so we didn’t scrutinize this too much on its own. But when coupled with this Brand Sheet, we’re feeling pretty confident that Mezco’s intentions for ThunderCats this year goes beyond the Tygra Mega Scale figure that is underway.