The second evil character that was under development for the line was S-S-Slithe, the evil leader of the Mutants before Mumm-Ra took the reins.It’s hard to get a sense of what the finished sculpture would look like based on this rough “skulch” but you do get a sense that sculptor Paul Bennett had a very strong grasp of S-S-Slithe’s hideous nature and lumbering bulk. The dimensions perfectly capture the cartoon and the toy likeness.

With Mumm-Ra being first evil character there was speculation about whether the base of all the evil characters would be similar to Mumm-Ra’s so that the evil characters could fit together in a loose sort of diorama display. That was how the heroic statues were created so it’s likely that S-S-Slithe would have had a similar base.

What we know for certain is that this line was cancelled far too soon and that it is a great shame that we never got to buy one of these bad boys. 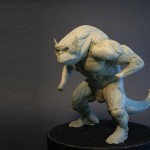 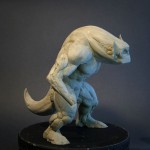