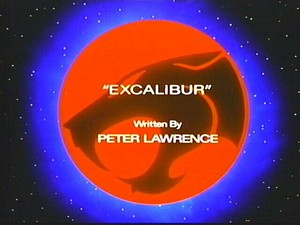 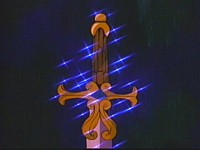 Lion-O and the ThunderCats learn that the Code of Thundera that they live by is shared by others and is part of a universal moral code. They are introduced to Merlin, caretaker of Excalibur, and to the legend of King Arthur and his code of justice, truth, honor, and loyalty. And they learn, after witnessing the futile attempt of Mumm-Ra to subvert the code for evil purposes, that true morality in its highest form is an end in itself and rests on universal moral principles. Any attempt to subvert it or ignore it, as in the foolish duel of Mumm-Ra and Lion-O, is doomed to failure.

One theory of moral development holds that moral judgment proceeds through levels from the avoidance of punishment, to social conformity, to an autonomous and internalized set of values (Kohlberg, 1963). An important distinction to make in considering moral behavior is between general moral principles and social conventions. Children, as early as between the ages of 4 and 6, have the ability to distinguish moral issues, based on principles like justice, fairness, and the welfare of others, from social conventions, arbitrary rules of conduct sanctioned by custom and tradition, like types of clothing or using first names or titles in addressing people (Turiel, 1983). Helping children make such distinctions is an important part of fostering their moral development.

From the very outset of the ThunderCats series, Lion-O’s iconic weapon, the Sword of Omens, was made a central feature. The source of the ThunderCats’ power and their mightiest weapon in defense of themselves and their friends, the Sword at times seemed almost invincible, and so it was natural that one theme the writers of the series would wish to explore was finding a force or weapon that could match the Sword in battle. One such attempt was “The Thunder-Cutter”, named after Hachiman’s sword of the same name. “Excalibur” is another in the same vein and, it has to be said, one of the more successful exploits into this territory.

The concept of pitting the Sword of Omens against not another sword from within the ThunderCats canon but instead a sword from ancient legend is an inspired one. Not only is Excalibur regarded throughout fiction as one of the mightiest swords ever to exist, but, because of that, its very name conjures up a formidable image of a sword that few could hope to better. Another notable thing about the use of Excalibur in this episode is the fact that it creates one of the series’ strongest-ever links between Third Earth and our Earth. Whilst the legend of King Arthur is predominantly fictional, it is nonetheless a fiction that pertains directly to our Earth—yet another indication that Third Earth and our planet are one and the same, merely at different stages of the planet’s evolution.

This episode is noteworthy for showcasing how central the Sword of Omens is to all of the series’ main characters. The most obvious example of this is that it is the source of the ThunderCats’ powers, as is demonstrated when the Eye of Thundera is (briefly) destroyed, stabbed by Excalibur, and the ThunderCats are robbed of their strength and powers. However, this episode also displays how much of an effect the presence of the Sword has had on Mumm-Ra himself. In the early stages of the ThunderCats series, Mumm-Ra is shown to covet the power of the Eye of Thundera, and his primary goal is to possess the Eye’s power for himself. After discovering in “The Garden of Delights” that he lacks the ability to warp the Eye’s power to his own evil ends, he gradually seems to fixate more on destroying it (and the ThunderCats) rather than possessing it. In this way, the concept of both the ThunderCats’ and the Eye’s presence on Third Earth seems to become more of an irrational obsession for Mumm-Ra, with seemingly his every deed being performed in the hope of destroying his enemies. This fact would be borne out in the show’s fourth season when the ThunderCats leave Third Earth for New Thundera – rather than returning to his home planet of Third Earth to try and conquer it in the ThunderCats’ absence, Mumm-Ra instead journeys to New Thundera and attempts to conquer that instead, thus indicating an obsession with defeating the feline heroes above all else. The very germ of that concept is actually evident with Mumm-Ra’s rant at the start of this episode, which lacks form but instead comes over as the lunatic ravings of a madman hell-bent on destruction and revenge.

This episode is also a notable one for Lion-O, whose character is cleverly exploited here by writer Peter Lawrence. In the series’ earliest offerings, Lion-O is shown to be a very flawed character, displaying a sense of lion-like pride that lands him in many difficult situations and is counter-productive to his effectiveness as a warrior and leader. Whilst Lion-O’s actions in this episode don’t hearken back to quite that early level of immaturity, Mumm-Ra, disguised as King Arthur, knows exactly the right ThunderCat to goad with his insults, taunts, and generally discourteous manner. That Lion-O should react in the manner that he does ironically brings to mind another sword-based episode, the aforementioned “The Thunder-Cutter”, in which Hachiman’s somewhat overbearing behavior brings out the indignant, youthful pride of the young Lord of the ThunderCats.

One thing that is interesting about Lion-O’s behavior in this episode is that one would expect the other ThunderCats to try and temper their young leader’s prideful actions with rationality and wisdom. Instead, Tygra and Panthro seem to be almost in favor of it, insisting that Lion-O has no choice and refusing to intervene in his duel with King Arthur (Mumm-Ra) on the grounds that it’s a matter of honor. Only Cheetara sees the futility of Lion-O’s conflict with the insane knight. It’s surprising that the other two elder ThunderCats would take the stance they do, perhaps indicating that King Arthur’s (Mumm-Ra’s) taunts got to them as well.

This episode is beautifully animated at times, with some incredible, almost cinematic, direction. The flashback of Arthur drawing the sword from the stone is accompanied by some prismatic sunlight and a lovely pan of the crowd, out of focus in the background, as well as some inspired transitions. Lion-O’s last-minute appearance on his unicorn is made all the more dramatic through a triple punch-in and a soft glow, as if there were Vaseline on the camera lens. The most dramatic effect, though, comes at the end of Act 1 and mid-joust in Act 2, when all motion is frozen and the whole image takes on the look of a painting. These small touches really help to establish this episode as one filled with suspense and drama. There are very few ThunderCats episodes with as dark and foreboding a feel as this one has, a sense that is emphasized by the fact that, in the end, the ThunderCats enjoy a lucky escape rather than a victory, with Merlin’s timely intervention the only thing that saves them from certain destruction.