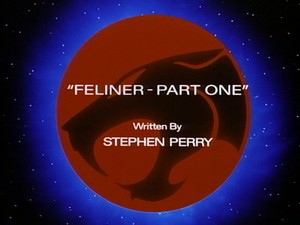 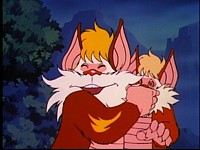 RATAR-O, the most powerful of all the Mutant Warlords, comes to Third Earth and takes control of the MUTANTS. RATAR-O brings SNARFER, SNARF’s nephew, with him after capturing him on the Planet of Snarfs. Knowing that the THUNDERCATS will help SNARFER, RATAR-O allows him to escape and seek the THUNDERCATS’ help. RATAR-O uses SNARFER as the bait, which will lure the THUNDERCATS into combat with his spaceship, the RatStar. The Rat’s Eye is the equivalent of the Eye of ThunDERa and the conflict is reduced to a struggle between these two symbols. Allied to LION-O’s massive strength, the Eye of ThunDERa wins, and SNARFER is freed.

The ThunderCats learn that friends and relatives of Snarf survived the destruction of Thundera and established a planet of Snarfs. Inspired by this information and the excitement of Snarf, they muster their forces, defeat the Mutants, and free Snarfer. The desire to rescue kin and be reunited with their social group is more powerful than the desire of the Mutants to do evil.

The bonds we feel to our culture and social group is a powerful motivator and serves as a basis for our identity. Our family, friends, and kinship group socialize us into the habits, norms, and beliefs of our society. By interacting with them, we acquire attitudes, behavior patterns, values, and ways of responding. Since interaction with others is so valuable, we should be open both to sharing with and learning from the significant others in our lives.

The only two-part episode in the entire series, the two parts that make up “Feliner” are easily two of the most exceptional and memorable episodes of ThunderCats’ first season. The episodes were penned by Stephen Perry, one of the finest writers to contribute to the series. Of the seven scripts he wrote, the two “Feliner” episodes are perhaps the finest of all.

While this may sound like overly effusive praise, I mean every word. In the course of the ThunderCats series there are very few episodes that present so many fresh, new and exciting themes, concepts, and even characters as this masterpiece does. In this first part, we are introduced to others of Snarf’s race (most notably Snarfer), the Mutant leader Ratar-O, a fearsome new vehicle in the form of the RatStar, and even a whole new planet in the form of the Planet of Snarfs. We’re also given a sneak peek at the ThunderCats’ new Feliner vehicle, which would provide a whole new dimension to the manner in which the ThunderCats would travel in future episodes, taking them back out into the stars from which they arrived in “Exodus”.

However, the most noteworthy thing about these elements is the manner in which they are introduced—each element is introduced in such a way as to maximize its potential impact. For example, after the title card has been and gone, the very first thing we see in this episode is the sight of four Snarfs traveling in some kind of hover car against an idyllic backdrop. For someone watching the series through for the first time this is a striking image, given that, as far as we know, Snarf is the last of his kind. Straight away the idyllic scene is shattered by the stark, militaristic-looking image of the RatStar moving into view, and within the first minute of the episode we have been introduced to the new characters of Snarfer and Ratar-O in a way that is enticing and keeps us wanting to learn more.

Needless to say, this episode is a brilliant one for Snarf, because it finally answers questions that until this point have never even been addressed, much less answered. We discover that Snarf is actually one of a whole species of Thunderian, and that “Snarf” isn’t even his real name! Although characters like Snarf were often used as “comic relief” in many animated series from the 1980s, ThunderCats actually gave Snarf a lot of serious material. This episode is a perfect showcase for how, when taken seriously by the writer, Snarf could be utilized as a potent storytelling force.

Even for non-Snarf fans, this episode is still essential viewing for providing depth and interest to the ThunderCats’ perennial villains, the Mutants. The introduction of Ratar-O, though only a guest character, is nonetheless a brilliant one. With the ThunderCats and Mutants locked in battle on Third Earth, it’s easy to forget that the Mutants are not, like the ThunderCats, the last survivors of their kind, but rather are members of a whole Mutant population back on their home planet of Plun-Darr. This is suggested periodically during the series with the appearance of generic Mutant warriors inhabiting Castle Plun-Darr, but it is confirmed here with the introduction of Ratar-O. In his appearance in this episode, Ratar-O oozes experience and cold calculation, and Vultureman’s recruitment of him brings a new sense of menace to the Mutants as a group. In another clever writing move, Stephen Perry places Ratar-O above the other Mutants in their pecking order by revealing that S-S-Slithe used to serve under him, not as a warrior, but in the ignominious position of cook! While subtle, it is these little touches that can make or break an episode, and Stephen Perry certainly attempts to pull out all the stops to make Ratar-O’s debut as memorable as it can be.

This episode also boasts another ThunderCats trademark, namely great, exciting, well-paced and memorable action sequences. In the past I’ve spoken about how some ThunderCats episodes are, essentially, just lengthy sequences of action, hung on a paper-thin plot. While such episodes can be entertaining for their visual impact alone, I’ve always believed that action sequences make the most impact when they are crucial to the underlying drama. This episode is a perfect example of that, as the Lion-O must confront the RatStar in an effort to free Snarfer. Seeing the raw power of the Sword of Omens face off against the devastating firepower of the RatStar is one of the standout scenes of this great episode.