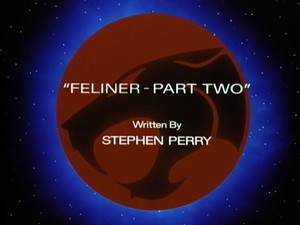 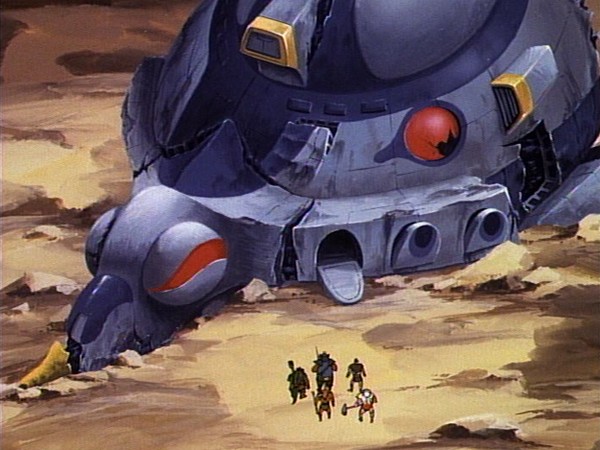 The THUNDERCATS have virtually completed their spacecraft, the Feliner, but cannot make it fly because they lack a Megacondensor. Desperate to return SNARFER to his home, SNARF suggests that the THUNDERCATS might find a condenser in the wreck of the RatStar. The episode follows the THUNDERCATS’ efforts to retrieve this vital component, opposed by RATAR-O, the MUTANTS, and MUMM-RA. Eventually, they succeed and blast off for the Planet of Snarfs with SNARFER. Right up until the last moment, it seems that SNARF will want to return with SNARFER and will leave the THUNDERCATS. At the last moment, however, he decides to stay with LION-O.

It is a mark of perception to be able to appreciate and value what is good in our present lives, for example, our parents, friends, and the realities of our living situation. Sometimes we are inclined to feel that something different would be better. So we idealize the past or fantasize about the future. In doing so, we lose an appreciation of the present and our perspective on what is good about our present reality. Then, unlike the ThunderCats, we do not make the effort to carry out our daily responsibilities and maintain that which is of value to us. It is important to keep in mind those things we value about our lives, whether our relatives, friends, or groups of which we are a part. And in doing this, it is important also not to take them for granted, but to make the effort to sustain our involvement with them and show our appreciation.

Although not quite to the same gloriously high standard of Part One, “Feliner – Part Two” is nonetheless a truly fine example of ThunderCats at its very best, blending a great story with beautiful animation and fantastically choreographed action sequences. Memorable for so many reasons, this episode is among the best of the best from the show’s first season.

The most noteworthy aspect of both parts of “Feliner” is the exploration Snarf’s character and the insight given into his species. In many animated series from the 1980s, “little guy” characters like Snarf would be utilized for two purposes, serving as the show’s “kid character”—an audience proxy who learns a lesson within the story and thus educates the show’s young audience without talking directly to them—or as comic relief.

What makes the character of Snarf so interesting is that he is actually never used for the first purpose—the “kid character” in ThunderCats was, uniquely, the series’ hero, Lion-O. While Snarf would admittedly be used for comedic value, he also worked when used as a serious, dramatic character like the other ThunderCats, and there are very few episodes that showcase his depth better than this one.

Part of what makes Snarf’s role in this episode so effective is the realization of what the audience has known for many episodes—that Lion-O is now fully grown and no longer in need of a nursemaid. This is perhaps the saddest aspect of Snarf’s character. His initial place amongst the ThunderCats was that of a caretaker, not even a real ThunderCat. Snarf’s initial status within the group dates back to “Exodus”, when Jaga excludes him from the list of ThunderCat nobles who will teach Lion-O the skills he needs to rule—a slight that does not go unnoticed by Snarf himself! This does change, though. Over the course of the series the bond between Snarf and Lion-O extends outwards to all the other ThunderCats, and in “Snarf Takes Up the Challenge”, the team readily admits that Snarf is indeed an invaluable member of the team worthy of the ThunderCat title. The tragic thing for Snarf is that, value aside, his identity within the ThunderCat group is still rooted in caring for Lion-O, and as Lion-O develops and matures into an adult over the course of the series, Snarf feels less and less necessary.

Although most of the best surprises were used up in “Feliner – Part One”, writer Stephen Perry still manages to conjure up one final bit of storytelling magic when Snarf tells Snarfer he plans to return with him to the Planet of Snarfs. The reason this is brilliant is because it brings to a head all the gently simmering elements of Snarf’s character mentioned above, allowing his full dramatic potential to shine through. The concluding, tearful scene of this episode is one of the most emotional of the entire series, and unquestionably the biggest roller-coaster ride of emotions seen since young Lion-O bade farewell to Jaga in “Exodus”. Not only is the scene executed to absolute perfection (the moment when Snarf recoils from Lion-O’s outstretched hand is devastating), but it also concludes the evolution of Snarf’s place within the ThunderCat ranks. While it is true that Lion-O no longer needs a nursemaid, the bond of friendship between the two characters is as great as it ever was.

While Snarf (and, to a lesser extent, Snarfer) dominate the proceedings in this episode, the continued presence of the Mutant general Ratar-O is also notable. Throughout this episode, a lot of the groundwork laid in the first part of “Feliner” in terms of Ratar-O’s character is realized. From his vicious streak while torturing S-S-Slithe, Jackalman and Monkian, to his calculated ploy to keep the ThunderTank in firing range, to the sense of deadly menace he projects when squaring off against Lion-O, Ratar-O marks himself out as the most formidable Mutant the ThunderCats ever face. That his plans ultimately end in failure is a testament more to the strength of the ThunderCats than to the ineptitude of the Mutants, which is not something that can always be said of guest villains!

If this episode has a weakness in its plot, it would be the insertion of Mumm-Ra. While it could be viewed as helping to bring things to a dramatic climax, in actuality it is a slightly pointless addition, given that Mumm-Ra’s involvement adds virtually nothing to the story. If anything, it serves to slow down the pace at which things move rather than speed them up. That his exit from the episode should be so tame (complete with clichéd exit speech) further reinforces the feeling that Mumm-Ra’s appearance is more to pad the episode than for any real dramatic purpose. As I say, this is a pity, for it’s the only element that mars an otherwise outstanding episode.

Although easy to overlook when dissecting the story, another important factor to this episode is the brilliant animation featured throughout. The renderings of the characters are lovely, with some of the most attractive images of Lion-O seen in the show’s first season appearing in this episode. The episode also features lovely use of shadow and lighting effects, which greatly help to enhance the on-screen presence of Ratar-O, nicely accentuating the pure evil of his character.

While it would be fair to say that “Feliner – Part Two” doesn’t quite live up to the brilliance of the first part, there is no shame in this. As it is, this episode is easily one of the finest from the latter half of ThunderCats’ Season One—even for non-Snarf fans!