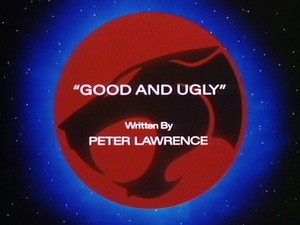 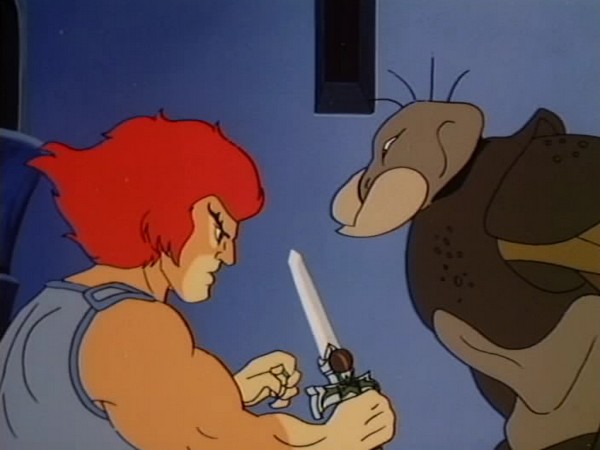 Lion-O and Snarf make the mistake of equating two aliens’ looks with their character and intentions. Because they have never encountered a spaceship or creature like the Terator, and because its looks, mannerisms, and sounds are ugly and foreign to them, they consider it hostile and seek to defend themselves by attacking it. On the other hand, because the Kymera is handsome and pleasing, they assume it is friendly. When their assumptions are proven wrong, they and the other ThunderCats are forced to do battle to avoid the Kymera’s destructive purposes and to help the Terator. Often our assumptions about others are based on peripheral characteristics rather than essential ones. Because some persons may be handsome or pretty, we judge them to be good, and because other persons are not pleasing in appearance, we view them to be bad.

This episode represents a lesson we know from our own experiences to be true—that appearances may be deceiving and we must go beyond looks to determine the qualities of persons. In a broader context, the lesson can be extended to include how we use stereotypes, or generalized conceptions of other persons, races, or classes. While generalizations about other groups may serve a constructive purpose in helping us to identify and classify peoples, e.g., in teaching us the cultural mores of an ethnic group, they may also be the sustaining roots of prejudice. Prejudice consists of rigid and hostile attitudes directed towards a group or an individual because he is a member of a group. When our generalizations become unwarranted and applied indiscriminately to individuals, we are guilty of prejudicial attitudes and feelings. It is a difficult task to assure that our stereotypes and generalizations are not unfounded or used indiscriminately. We must always be on guard so that we do not fall victim to prejudicial thinking.

When ThunderCats was launched by Rankin/Bass, one of the stated goals of the series was to educate children in life lessons while sugarcoating this educational pill with an engrossing dose of action and adventure. At the time the show debuted, this was not a new approach—Filmation’s pioneering adventure series He-Man and the Masters of the Universe had turned this into an art form, and so it could be argued that ThunderCats was simply following the trend of the time. While this may have a ring of truth about it, it does ThunderCats a grave disservice, for at its best the series actually succeeded better than any of its contemporaries at the goal of embedding meaningful lessons into its storytelling, and “Good and Ugly” is a fantastic example of this.

One of the key ways ThunderCats was able to so effortlessly incorporate moral messages into its adventures was through the character of Lion-O. Many series from this period featured a diminutive “kid character” who would be educated by the elder characters in day-to-day life situations, such as the value of teamwork, co-operation, not judging a book by its cover, and so on. The desire was to avoid preaching to a young audience directly, instead inserting a proxy character who could learn the lesson the course of the story. ThunderCats managed to mask this further by making the character who needed to grow, mature and develop an adult character, and the series’ main hero at that—Lion-O. As such, many of ThunderCats’ earliest episodes are built around the concept of Lion-O developing through his mistakes, such as acting impulsively or judgmentally, and this episode is built around that concept.

Even though the involvement of the Feliner in this episode does clearly place it at a certain point in the series from a continuity perspective, in many ways this episode feels as though it belongs earlier in the show’s run. Over the course of ThunderCats’ first season, Lion-O grows and develops as a character to the point where, when comparing episodes from early in the first season to later, there’s a noticeable difference in Lion-O’s portrayal and personality. He becomes less of an adolescent in a man’s body and more of a mature adult who fits comfortably among the other ThunderCat elders.

In this episode, Lion-O displays a number of character traits and flaws that seem almost like a developmental step backward. This begins right at the start of the episode with the scene of him relaxing with Snarf. While it feels perfectly natural, it does hearkens back to the youthful, lazy Lion-O seen in some of the earliest episodes. This continues with his impulsive attack against the Terator ship (albeit largely at Snarf’s urging), his judgmental attitude toward the Terator based upon its appearance, and his overly trusting approach toward the Kymera based on the same criteria. This is not a criticism so much as an observation of a lack of continuity for Lion-O’s character, given where the episode falls in time. It in no way detracts from the episode itself.

In terms of storyline, this episode is a brilliant example of wrapping up an important message for a young audience in an action-adventure scenario. Positively brimming with suspense and action, all of which is brilliantly paced, the entire premise of the story is based around the concept of not making judgments based on physical appearance, and using the concept of battling aliens as an illustration of this. That the two aliens seen in this episode should provide a symmetry in this example (one ugly but benevolent, the other peaceful-looking but evil) reinforces the lesson in a way that is extremely believable. Each encounter is a precursor to ever more action and adventure, but never in a manner that dilutes the moral message of the episode.

When looking for flaws in this episode, to be honest there are practically none. The author of this episode, Peter Lawrence, was second only to the series’ head writer Leonard Starr in the number of scripts bearing his name, and by this point he had long been the series’ story editor and de facto head writer. The storyline is mature and highly effective; the dialogue, while not the snappiest or most eloquent to appear in the series, more than gets the job done; the guest characters are effectively used; and the animation is of a very high quality, both in terms of the actual artwork of the characters and also the use of light and shade, special effects, etc. While this episode narrowly misses achieving “classic” status, it is nonetheless one of the most solid and entertaining episodes from the latter end of the show’s first season, and it’s a testament to Peter Lawrence’s superb writing ability.