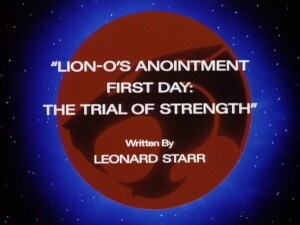 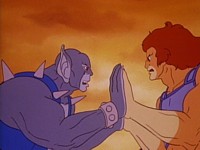 LION-O awakes on his birthday to learn that he has “come of age” and must undergo the Anointment Trials, a ritual every Lord of the THUNDERCATS has had to survive from the beginning of THUNDERCAT history. LION-O proceeds weaponless towards his first trial: PANTHRO’s Trial of Strength. He escapes the Acid Lake, the Great White Void, the Vortex, and the CRABMEN. LION-O encounters PANTHRO. An earthquake interrupts their wrestling. LION-O slips into a crevice and PANTHRO offers help. LION-O refuses: “The Code mustn’t be violated.” PANTHRO attempts to stop a bolder from rolling into the WOLLO village…LION-O helps him, throwing the bolder off course, and proving his great strength. He has passed the first trial and moves on to meet CHEETARA’s test.

Lion-O begins a series of trials as a rite of passage, which, if passed successfully, will sanction him as Lord of the ThunderCats. Since the rite is linked to the Code of Thundera, it is not surprising that even in the midst of the trial he and Panthro, who must play out antagonistic roles, are true to the Code and show concern for one another and the Wollos. Lion-O is gratified by his success as he moves on to the next trial. Snarf, as representative of the ThunderCats’ community, joins him in that recognition.

The rituals of our lives, whether secular rites such as school ceremonies or promotions, or religious ceremonies serve many different functions. Sociologically, they serve to bind us together under a common set of customs. Metaphysically, they serve to define reality by a particular meaning-system. And psychologically, they serve to help us define an individual identity and attain individuation within the group. Children must be given tasks appropriate to their age of development, whether cognitive, physical, social, or emotional. In succeeding according to their level of mastery, they achieve a sense of self and identification within their peer group and within society as a whole. It is helpful to portray tests, like Lion-O’s trials of strength or the variety of tests and challenges children must pass in their lives, as opportunities for children to achieve and attain a sense of competence. When they succeed in a task, it is also important for them to feel the gratification and their role in the success rather than pass it off as the result of luck or external circumstance.

As is often mentioned, one of the central themes of the ThunderCats series is that of the teamwork and sense of family that exists between the ThunderCats—the lone survivors of their doomed planet, without the bond that exists between them they would all likely struggle to survive. In that sense, the concept of the ThunderCats fighting amongst themselves is, in many ways, one of the most disturbing things that could be introduced into an episode. This is actually tackled more than once throughout the course of the series, but never to greater or more memorable effect than in the five episodes that comprise Lion-O’s Anointment Trials.

In many ways, the Anointment Trials actually turn every concept explored within the ThunderCats series on its head. For example, Lion-O’s use of the Sword of Omens to summon the other ThunderCats to his aid is a trademark of the series. Likewise so is his reliance on that selfsame Sword to aid him in combat, almost as an extension of his being. In this episode, Lion-O must not only survive alone, but he must compete and even battle against his friends, unarmed and unaided, performing what is essentially a “rite of ascension” ritual to fully take the mantle of Lord of the ThunderCats (as opposed to Hereditary Lord).

In actuality, it’s hard not to think of this as somewhat cruel and taking tradition to its extremes. Whilst on Thundera such rituals could be carried out on the ThunderCat’s home planet, one would think that to force Lion-O to take on the perils of an alien world, as well as his friends, would be too much to ask of one who has already been through so much, and proved himself as a great leader and friend. And yet, in a way this is an indicator of the ThunderCats’ greatest strength. Our feline heroes live their whole lives by the Code of Thundera—in many ways it fills their lives in the way that a religion would for many of us—and it is from the Code of Thundera, more than anything else, that the ThunderCats are able to draw strength and a sense of identity as they build a life for themselves on Third Earth. As such, even though it seems harsh on Lion-O, one can come to understand why the other ThunderCats feel the need to put their already somewhat beleaguered young leader through the ordeal of the Anointment Trials.

From day one, another central theme of the series has been Lion-O’s character development—he has steadily grown from a somewhat prideful and arrogant boy into a mature and confident man throughout the episodes thus far. Whilst Lion-O would continue to develop as a character, the five episodes that make up the Anointment Trials are something of a turning point for him. For, during the Anointment Trials, Lion-O receives the proverbial “slap in the face” of realizing that his title is not something to simply be inherited but earned, and so is thus forced to learn lessons that put the finishing touches to his maturity and development. Whilst it would be an overstatement to say that these episodes show Lion-O turn from a boy into a man (for that process had already begun many episodes earlier), nonetheless these episodes accentuate the realization of Lion-O’s maturity and leadership qualities.

These episodes are of course memorable because they are totally unlike any others from the rest of the series. Whereas a regular ThunderCats episode would essentially center around the latest scheme of Mumm-Ra or the Mutants, these episodes are basically an attempt to tell a different type of story, a story about ThunderCat heritage, tradition, identity, belief, leadership and character development. In short, this episode, and indeed the other Anointment Trial episodes that follow it, are beautifully crafted tales that demonstrate beyond all doubt why ThunderCats at its very best can hold its own with the very finest fantasy storytelling around. A true classic.