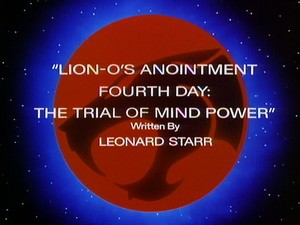 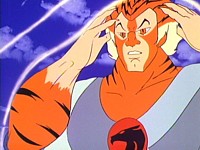 LION-O undergoes the fourth trial in his Anointment Trials, a series of tests every Lord of the THUNDERCATS has had to pass in order to be worthy of the inherited title. This trial is TYGRA’s trial of Mind Power and LION-O’s goal is to reach the Desert of Sinking Sands – not a difficult objective in itself. However, TYGRA uses his mind power to create illusions which distract LION-O: a windy blizzard on a clear day; darkest night when it is daytime; and pathways which lead nowhere. LION-O is forced to decide what is REAL and what is not. The most challenging illusion is TYGRA’s recreation of the destruction of LION-O’s home planet, ThunDERa. LION-O relives the fear he experienced when he was a young boy leaving his doomed planet, ThunDERa. Through this illusion, LION-O confronts and overcomes the greatest fear that has tormented him since he arrived on Third Earth. When LION-O finally succeeds in overcoming TYGRA, and his own fear of being afraid, he discovers that his final trial will match him against MUMM-RA.

In his fourth trial, Lion-O learns the powers of concentration and the ability to focus his mind on making judgments. Confronted with Tygra’s ability to create illusions, Lion-O copes by judging correctly what is real and what isn’t. Guided by this power of right judgment, he meets his greatest fear, that he will be afraid again, brought on by the nightmare of Thundera’s destruction. Facing the fear and judging it to be in the past and no longer realistic, he triumphs over both the fear and Tygra in the trial.

Like Lion-O, we must learn to distinguish reality from illusion. The acumen of making right judgments is an important skill to be learned. Our powers of judgment help us know what is a realistic fear and what is an unfounded fear. In learning how to focus our mind and how to make this judgment, we can relate to the world with confidence.

After the brief lull of “The Trial of Cunning”, “The Trial of Mind Power” sees Lion-O’s Anointment Trials back to their best with, arguably, not just the strongest installment of the Trials episodes but perhaps one of Leonard Starr’s strongest-ever ThunderCats scripts.

Perhaps the most obvious element to cause this episode to stand out from the pack is how it thrusts the spotlight firmly on Tygra. Arguably the most complex and almost certainly the most enigmatic of the ThunderCats, any episode that heavily features Tygra tends to stand out as one of the series’ most unique and exciting offerings, and those episodes tend also to have a strong flair for the exotic, be they the addiction-fueled “The Garden of Delights” and “Crystal Canyon”, or this episode, which showcases Tygra’s previously undisclosed ability for casting illusions using the power of his mind. While never seen before, these mind powers don’t feel out of place or out of character in the context of Tygra’s cerebral and introspective nature. What’s more, his power of invisibility is itself a kind of illusion, so these powers feel like a natural—if rarely used—extension of the Tygra we already know.

Whatever the whys and wherefores, Tygra’s abilities in this episode make for one of the most unique challenges Lion-O has to face, not just in the Anointment Trials but in the entire ThunderCats series. That Leonard Starr would think to test Lion-O in this way shows just how well considered his writing process for the Anointment Trials was—whilst three of the five Anointment Trials deal primarily with Lion-O’s physical abilities, both “The Trial of Cunning” and this episode would test his mental and emotional fitness.

However, where “The Trial of Cunning” was, at times, a slightly mundane test for Lion-O, this Trial sees him put through arguably the most demanding test of all, with Tygra forcing Lion-O to relive the destruction of Thundera. This one scene alone is perhaps the single most powerful and relevant to Lion-O’s character development throughout the entire series. Lion-O’s devastation at the destruction of his home planet was touched upon beginning in “Exodus”, “The Time Capsule” and “Return to Thundera” explore his homesickness, and “ThunderCats Ho!” later shows us that the nightmares never really ended, even after the Trials. So it’s easy to see why forcing Lion-O to relive Thundera’s destruction would be the ultimate psychological test. In reliving it, Lion-O comes to the realization that his biggest fear in relation to Thundera’s destruction is that he’ll be that afraid again. Though just a small line of dialogue, this reveals so much about how traumatic the destruction of Thundera must have been to the pre-adolescent Lion-O, seeing everything he treasured and relied upon for security ripped away from under him. Once again, little touches like these define the greatness of episodes such as this one.

If there was one element of this episode that didn’t quite ring true, it would be how much perverse pleasure Tygra seems to take at certain points during Lion-O’s trial. Whilst some of the other ThunderCats would tackle the act of trying to better Lion-O in the Trials in a businesslike fashion, at one point Tygra actually taunts the young lord – after subjecting him to a particularly arduous early illusion, Tygra tells him, “So much for the warm-up – now for the game!” It could be argued that Tygra’s taunting is designed to further push Lion-O’s psychological boundaries and get inside his head, yet somehow it feels strange that Tygra should address Lion-O in such a mocking fashion – and, perhaps even more strange that Lion-O doesn’t react to it! Something else that reinforces the theory that perhaps Tygra’s goading of Lion-O is all part of the Trial is how Tygra instinctively uses his mental powers to protect Lion-O when he is at the mercy of S-S-Slithe’s Skycutter, somewhat negating any potential theory of underlying emotions on Tygra’s part, yet somehow his behaviour in this episode still feels mildly erratic.

If this episode had a weakness, it would probably be that the animation does not match up to the quality of the Anointment Trials that precede it. However, for an episode of so high a caliber, this is forgivable. With so much else to recommend it, this episode is a complete gem and deserves to be seen by all ThunderCats fans!

Chris rightly points out the power in that one line of dialogue, “My biggest fear is that I’ll be afraid again.” On first listen, this sounds ridiculous—fear of fear feels like a cop-out. Why can’t Lion-O have a more straightforward fear to conquer, like bats or his reflection? But what Lion-O is realizing, and what Leonard Starr is conveying in that one line, is that the long-term effects of trauma aren’t rational. When something traumatic happens to you, even if it’s unlikely to happen again, the emotions associated with its memory can be overwhelming. Lion-O isn’t afraid that Third Earth is going to blow up too. He’s afraid of how the memory makes him feel—the emotional shockwave that recalling Thundera’s destruction kicks up.

Robert Kuisis points out that Lion-O is finally able to see Thundera’s destruction as an event in the past that can’t reasonably hurt him anymore—he’s in control of his thoughts and feelings, and he can choose to leave the events of the past behind him. Whether that’s healthy or not, or a sensible model for kids at home who may themselves have experience trauma, I don’t know—I’ll leave that question to the child psychologists. For Lion-O, though, the nightmares don’t really end, and his guilt over leaving people behind will drive his actions down the road. But at least he now sees it for the trauma that it was.