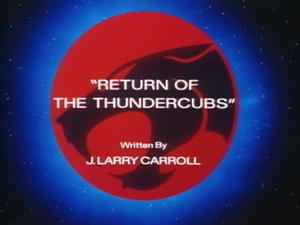 Apart from concocting exciting episodes, the writers on ThunderCats were also responsible for inventing new characters. Born from their fertile minds, many new and interesting characters premiered in various episodes, expanding the ThunderCats’ population substantially during the course of the show’s run. With such a huge cast, it is inevitable that some of the intended one-time personas would make a reappearance.  In this episode, writer J. Larry Carroll welcomes back Peter Lawrence’s creation, the ThunderCubs, who made their debut in the fourth installment of their eponymous five parter.

The episode begins with a disgruntled Mumm-Ra recapping the events that took place in the “ThunderCubs” episodes where he lost the Treasure of Thundera and it was scattered all over New Thundera. The Ancient Spirits of Evil awake from their sinister slumber and severely rebuke Mumm-Ra for his failure. Perhaps due to their lack of understanding of the meaning of the word “ultimatum”, the frightening foursome give Mumm-Ra one more last chance to redeem himself, again.

In a voice that sounds awfully like Panthro’s, the spirits instruct Mumm-Ra to seek out a fragment of the casket that held the Treasure of Thundera and use Cheetara’s extra sensory powers to locate the remaining pieces of the treasure. Like an Olympic sprinter, Mumm-Ra dashes to the Mumm-Raft, and with his trusty pilot Ma-Mutt at the controls, the dastardly duo teleport to New Thundera. Using his keen canine sense, it doesn’t take long for Ma-Mutt to locate a broken piece of the casket. As if on cue, Tygra, Cheetara, and Panthro arrive on New Thundera in the Feliner to embark on an expedition to locate the remaining relics of the Treasure of Thundera. From a hidden location, Mumm-Ra zaps the Feliner, causing it to crash.

Back on Third Earth, the Sword of Omens warns Lion-O of the Feliner’s accident. With their sole interstellar craft on New Thundera, Lion-O is forced to make a Hobson’s choice. Waving a white flag, Lion-O and Snarf cautiously approach Castle Plun-Darr and offer to pay the Mutants in exchange for transporting them to New Thundera in the RatStar. Initially stunned by this move, the Mutants nevertheless agree to Lion-O’s deal and once airborne, they doublecross their passengers but Lion-O and Snarf eventually gain the upper hand and take control of the RatStar.

On New Thundera, Mumm-Ra transforms into the Fog of Despair, sucks up Cheetara, Tygra, and Panthro, and drops them in the Canyon of Youth. The valley regresses the trio to their childhood. Then taking on the guise of Lion-O, Mumm-Ra hands Cheetara the fragment and orders her to locate the treasure. “Just do it you little brat!”, he snaps when Cheetara hesitates. Like a human metal detector, the female ThunderCub locates one of the relics, the Mirror of Truth. The real Lion-O arrives in the nick of time and uses the Sword of Omens in conjunction with the mirror to restore the ThunderCubs to their adult state. Cheetara then uses the mirror to reflect Mumm-Ra’s fire back at him, sending the villain reeling in retreat.

Like some of the previous episodes, Carroll introduces the audience to another piece from the Treasure of Thundera, the Mirror of Truth. The relic itself doesn’t feature much in the episode and only appears near the very end to resolve the episode. The ThunderCubs are used more effectively here than in their debut. Since it would have been difficult, if not impossible, for Mumm-Ra to con the adult Cheetara into locating the relic for him, turning her into a naïve child was an intelligent move by the devil priest. The “Mumm-Ra Lion-O” with elongated canines and a mean demeanor is also nice touch.

The scenario of Lion-O asking the Mutants for help is a clever move by Carroll and adds more flavor to the story. Such a pseudo-truce between the ThunderCats and the Mutants was also present in “The Mountain” but while it created intensity and a sense of danger in that episode, here it is more benign mainly due to the Mutants being depicted as buffoons.

The story of “Return of the ThunderCubs” does have some fascinating ingredients but unfortunately the writer neglects to explore them. A sizeable chunk of the episode is allotted to Mumm-Ra’s dialogue with the Ancient Spirits of Evil as well as his preparations to set his plan in motion. While this attention to detail is admirable, it leaves little time to be devoted to other aspects like exploring the power of the Mirror of Truth or a more exciting final battle. Consequently, the last quarter of the episode rushes to achieve the resolution quickly.