Secret of the Ice King 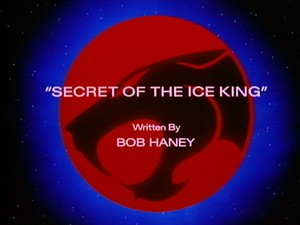 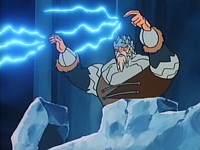 A giant ICE KING is accidentally released from his glacial prison and attacks the Castle of the Snowmen, defeating the SNOW KNIGHT. The SNOW KNIGHT sends SNOWMEOW to ask the THUNDERCATS for help. After a series of confrontations and misunderstandings, it transpires that the ICE KING is searching for an egg in which his one-time Princess is trapped. When he finds it, he melts away, entering the egg and reuniting himself with his Princess.

The bonds of friendship, sworn by the Code of Thundera, lead LION-O to aid the Snow Knight against a legendary and ancient figure, the Ice King. The Ice King is driven by a primal urge, and the intensity of his drive compels Lion-O and the Snow Knight to recognize it as justified and positive. They decide to help him rather than block his intent and, creating a truce, they help him attain the egg he seeks. Gratified by the blissful vision he sees in the egg and by the memory of his past love, the Ice King expires, fulfilled in his quest. Sometimes our ability to empathize with others results in the acknowledgment that their needs and goals at a particular time are very important and necessary to them. In some instances, it is a worthwhile choice to set aside our own preoccupations and help them attain what they need. True friendship means at times we sacrifice our own petty needs to help others, especially when they are dealing with more valued goals.

On the face of it, “Secret of the Ice King” should be just a run-of-the-mill ThunderCats episode, in the sense that there’s nothing very original about it. At the point that this episode appears in the series, the ThunderCats had tackled their fair share of mute super-powered beings both mechanical and magical, and on paper the Ice King should have been a somewhat boring regurgitation of these characters. “Should be” is the operative phrase, for, while this episode might not initially seem that original, it scores both in terms of the unique way these concepts are executed, and just for being a very solid, entertaining episode.

In a lot of animated series from this period, weaker scripts would have certain things just conveniently happening in ways that could feel rushed or forced, and at times even a high quality offering such as ThunderCats would be susceptible to this weakness. However, “Secret of the Ice King” manages to successfully avoid this pitfall, with all of the episode’s major plot points following in a very logical and satisfying manner, from the major turning points in the storyline to minor details, such as how Cheetara comes to be outside of the ThunderTank when the Ice King freezes it. This can be attributed largely to the episode’s author, Bob Haney, a veteran comics writer who would have been used to crafting tales to a certain level of detail. Indeed, this episode has a lot of the vibe and sensibility of a comic book adventure, with all the plot point twists and turns necessary to keep an audience intrigued throughout.

While some ThunderCats episodes suffer from having somewhat one-dimensional storylines (a straightforward premise drawn out over a series of action sequences), this episode has no such handicap. The Ice King’s storyline and mysterious origin gradually unfold piece by piece in a way that tantalizes and teases the audience. Indeed, the final piece of the puzzle concerning the Ice King’s origin is not revealed until the episode’s final act, where Snowman, free from the pressure of battle, is able to successfully recall the remainder of the legend of the Ice King. Once again, the strength of this episode is all in its execution; had a less skilled writer attempted to expand upon the same premise, chances are that the end result would have been, if not inferior, then certainly very different.

As to the character of the Ice King himself, from the outset he feels like a highly menacing threat with a true air of mystery, thanks not just to the script but also the excellent direction and animation of the character. To make a mute character interesting can be quite challenging, but a lot of what makes the character of the Ice King work so well is his on-screen personality. If there is one flaw with this episode, it would be that the Ice King’s persona changes slightly during the course of the episode. After freezing the ThunderTank, the Ice King laughs in triumph, believing he has beaten the bothersome ThunderCats. In light of the concluding revelation that the Ice King is not a villain but simply someone on a quest to find his true love’s prison, taking joy in the ThunderCats’ defeat would appear to be somewhat out of character. It would have made the resolution of the Ice King’s story feel much more authentic if these few seconds of animation had been omitted from the final episode. Nonetheless, this is a relatively minor nitpick which can be explained away—the Ice King was a warrior of olden times and his reactions were based on battle instincts, or he legitimately perceived the ThunderCats as evil attackers. However, it’s a shame that there is an element that needs explaining away in what is otherwise a very tight and solid script.

The snowy areas surrounding Hook Mountain obviously lend themselves perfectly to the Ice King’s magical ice-and-snow-based powers, but they also serve to add a different flavor to the episode, particularly when the snow invades other parts of Third Earth. It’s a little unfortunate that, in production order, this episode appears immediately after “Lion-O’s Anointment Fourth Day: The Trial of Mind Power”, as that episode too takes place in a snowy environment and features an appearance by Snowmeow. Two in a row rather weakens the impact that this episode could make, if it were the first snow-based episode in a while.

The further into Season One you go, the clearer it becomes that the writers were having a harder and harder time coming up with new and original ideas. This is perhaps one reason why so many new characters and concepts were added to the show’s later seasons. “Secret of the Ice King” may not be a classic episode in the truest sense of the word, but it reuses locations and character tropes in refreshing ways that make for a really solid episode.