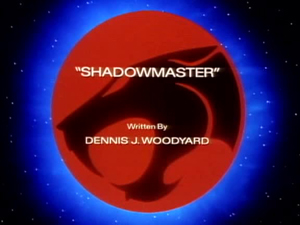 At first glance, Lion-O, the muscular, underwear-clad, sword-wielding chief protagonist of ThunderCats, seems like a typical children’s cartoon hero. However, a deeper look into his past reveals a rather tragic character. Before even reaching adulthood, he loses his home planet, his mentor, and his father. However, the writers cleverly alleviated some of the sadness by providing Lion-O with a new home, first in the form of Third Earth and then New Thundera, and also by bringing his mentor Jaga back to life, albeit as a spirit. In this brilliant episode, Dennis J. Woodyard reveals the true fate of Lion-O’s father, finally giving the young lord closure on this issue.

In the Shadow Realm, Lion-O, who strangely chose not to take the Claw Shield with him, is forced to fight the Shadowmaster’s conjured beast using flint rocks. Back at Cats Lair, the Shadowmaster’s Shadowbat steals the Sword of Omens with Snarf still hanging onto it and flies away. With the connection between the sword and the book broken, Lion-O loses his strength and falls to the ground.

Just when all seems lost, help arrives from the unlikeliest of places. Mumm-Ra, who has quietly been observing the proceedings in his cauldron, secretly sends Ma-Mutt to throw a wrench into the works. Changing into a giant bat, Ma-Mutt destroys the Shadowbat and carries Snarf and the sword back to the Cats Lair where Snarf quickly reconnects the sword with the Book of Omens. Having regained his strength, Lion-O calls the Sword of Omens to him and he and Claudus use it to trap the Shadowmaster in the ruins of his fortress while they make their daring escape.

The father-son reunion, while very short-lived, is gratifying for the audience as well as Lion-O. Unlike the ending of “Return to Thundera” where Claudus is presumed to have died, leaving Lion-O with a lot of sadness, here his departure is a happy one as he goes on to join Jaga in the spirit world.

From the animation, to the musical score, to the tight fast paced script, everything about this episode is top-notch.  The mysterious Shadowmaster is a well crafted and formidable villain who fits perfectly into the ThunderCats mythos. Even the re-introduction of Claudus is well explained via a series of astronomical and magical events.

However, the jewel in the crown is the characterization of Mumm-Ra as an insecure and crafty antagonist. In most episodes, Mumm-Ra has always been the head honcho, terrorizing the Cats as well as his own cronies the Mutants and the Lunataks. With the Shadowmaster threatening to take over his place, Mumm-Ra goes behind the Ancient Sprits’ backs to ensure that his competitor fails. Assisting his mortal enemies the ThunderCats is a first for Mumm-Ra and shows not only his dire desperation but his shrewdness as well, knowing very well that the Shadowmaster could easily prove to be more troublesome than the ThunderCats.

Even though newcomer villain the Shadowmaster fails to impress the Ancient Spirits, debutant writer Woodyard succeeds tremendously in treating the audience to a superb episode.