Sword in a Hole 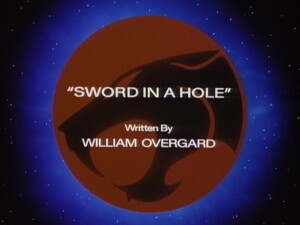 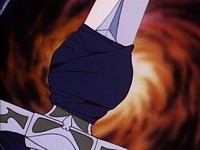 An S.O.S. from the edge of a Black Hole in deep space sends LION-O, SNARF and CHEETARA out in the Feliner. CAPTAIN SHINER, a Prussian space mercenary working for MUMM-RA, captures LION-O and SNARF. The Sword of Omens is seized and MUMM-RA appears. He hurls the Sword into the Black Hole. CHEETARA returns to the Lair to get help. She and PANTHRO eventually seize CAPTAIN SHINER’s ship and head for the Black Hole, which, it turns out, is no more than a “clean-up space device” devised by Venusians many light centuries ago. They rescue the Sword and CAPTAIN SHINER appears to go down with the ship in the aftermath of the adventure. In the closing seconds, however, he is seen sailing his ship into deep space.

Mumm-Ra’s complicated attempt to destroy the Sword of Omens is foiled by the extraordinary teamwork displayed by the ThunderCats. Each uses his unique abilities in cooperation with the others for the common good. Panthro, using his courage and knowledge of scientific theory, shows no fear of the unknown in leading their commandeered ship into the Black Hole. And he calls upon his technological knowledge to power them out. Lion-O displays his belief in Jaga and the Sword’s powers and uses his will power to summon the Sword. Cheetara shows her determination and perseverance in not giving up on them when they vanish into the Black Hole. And even the mercenary Shiner, who was originally in conflict with the ThunderCats, acts on their behalf and his own with his spacemanship when they encounter the space debris. As a result of the cooperation, the Sword is rescued and the ThunderCats are able to return home.

Cooperation is a basic and necessary requirement for maintaining the welfare and stability of society. A norm of reciprocity governs our interactions and is universally found in all moral codes. People help those who help them and do not injure those who have helped them (Gouldner, 1960). Moreover, when two or more groups in society are in conflict, in the face of compelling goals which are appealing to both groups and need the energies of both groups to be achieved, conflict is reduced and cooperation established (Sherif, 1958). We have much to gain when we seek to work in cooperation with the groups we contact in our daily lives. We should seek to make our interactions cooperative not only when faced by a super ordinate goal or crisis, but in the normal course of events. In doing so, both we as individuals and society as a whole benefit.

As has been stated before, William Overgard is regarded by many ThunderCats fans as one of the series’ weakest writers. In fairness to this point of view, his output in the series’ later seasons would be some of the most bizarre material ever to appear in ThunderCats However, where this is unfortunate is that it overshadows several of the excellent episodes that Overgard contributed to Season One, including this outstanding effort.

It’s worth pointing out that villains in animated series of this period tended to be very one-dimensional. Most would be just blatantly evil, only a couple of grades up from simplistic cartoon villains like Dick Dastardly or Snidely Whiplash, while others would be misguided souls who would, by the episode’s resolution, have completely seen the error of their ways and sworn off evil. In this episode we are introduced to Captain Shiner, a character who, unusually, fits into none of those molds. Neither pure evil nor pure good, Shiner is simply a mercenary, a character with few enough morals that he is happy to work for Mumm-Ra for the right price. By the episode’s conclusion, however, Shiner is shown to both be brave and have a twisted sense of honor, going down with his ship after ordering the ThunderCats to save themselves. Although he is not given a great deal of substantial material in this episode, Captain Shiner is nonetheless one of the most interesting and unique of the ThunderCats’ foes. It’s almost a shame that in his next appearance, in the five-part “ThunderCats Ho!”, Shiner was played much more as an unscrupulous villain rather than as the intriguing mercenary that he is in this episode.

Although the ThunderCats-in-space concept had been tackled earlier in the series (most notably in “Mandora and the Pirates”, also penned by William Overgard), this episode marks the first proper foray into a new type of ThunderCats adventure, thanks to the first proper outing of the ThunderCats’ new craft, the Feliner. The introduction of the Feliner into the series was a clever one, enabling stories such as this one to evolve naturally without additional guest characters or convoluted plot gymnastics. For example, prior to the introduction of the Feliner, an episode like this would have either required either the presence of a space-faring guest character, like Mandora, or a reason for Shiner’s ship make a stop on Third Earth. With the Feliner established as a regular ThunderCat vehicle, the space-based action of this episode is able to begin straight away.

As for the story itself, it manages to be both innovative and connected to established events. In the series’ earliest episodes, Mumm-Ra’s primary goal was to possess the Eye of Thundera for himself; but following his unsuccessful attempt to take command of the Eye of Thundera in “The Garden of Delights”, Mumm-Ra would subsequently seek to destroy the Eye more than anything else. This tactical shift is very much underlined by this episode. Perhaps one of the greatest achievements of this episode is that it actually feels like Mumm-Ra has succeeded in his goal! It’s hard for the audience to imagine how an object as relatively small as a sword could be retrieved from within a black hole, itself the epitome of mystery and a worthy parable for hopelessness. The episode’s explanation for what is inside a black hole may seem like a throwback to 1950s science fiction, but it is strangely effective in context and helps give this episode a unique and memorable flavor.

That’s not to say that this episode is without flaws. There are certainly a couple of elements in the script that could have been altered for the sake of realism—or at least comparative realism—the most obvious of these being the ThunderCats’ ability to breathe in space. While it’s not the first or only time we’d see it, the concept of characters being able to breathe in space is a matter of much derision from even the series’ most diehard fans. A lot of apparent plot holes can be explained away by creative thinking, but there aren’t many easy-to-swallow theories that explain how humanoid flesh-and-blood beings like the ThunderCats would be able to survive with no air, particularly when, in “Exodus”, Leonard Starr established the importance of atmospheric compatibility for a new home planet. Another minor touch that doesn’t ring true is Lion-O’s immediate recognition of coffee when aboard the Vertis. Even though Third Earth may be a post-apocalyptic version of our Earth, coffee hasn’t been mentioned at any point in the series prior to this episode, and it feels unusual for Lion-O recognize it.

These gripes aside, this is actually a very unique and memorable episode that deserves more plaudits than the writer credit might allow it. Cursed with a couple of very minor flaws, it’s important to recognize that these things do not overshadow what is, otherwise, an extremely memorable, unique, entertaining and well thought-out episode.