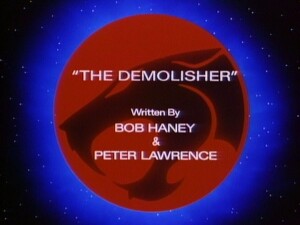 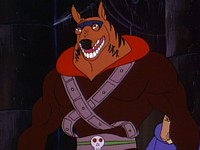 The DEMOLISHER is a fearsome creature driven only by the desire to fight and destroy. If there’s no one to fight for pay, then he’ll fight for pleasure. His victories are witnessed, and opponents drummed up by his sidekick, the DIRGE. The DEMOLISHER lands on Third Earth to challenge MUMM-RA, not knowing that such a challenge is made futile by MUMM-RA’s immortality. When he has defeated MUMM-RA and is about to destroy him forever, MUMM-RA flees into the Pyramid, summoning the DEMOLISHER after him. There, he indicates LION-O’s image in the Cauldron, taunting the DEMOLISHER and inciting him to challenge the THUNDERCAT. LION-O’s initial reaction to the DEMOLISHER’s challenge is to avoid a fight, but he is eventually forced to defend himself. The fight reaches a stalemate, which LION-O breaks by summoning the other THUNDERCATS, not to destroy the DEMOLISHER, but to prevent him from fighting until he effectively destroys himself. Respecting the DEMOLISHER’s prowess and courage, he tries to persuade him to fight for the Code of ThunDERa, but the DEMOLISHER is driven only by violence and he teleports himself and the DIRGE back to his spacecraft, leaving Third Earth forever.

The Demolisher is a mercenary, who seeks violence for violence’s sake, and fights without regard for any principles. He has no beliefs and fights not for a cause, but merely as an exercise in strength. As a result, he appears out of control and is a victim of his own disorder and confusion.

Whenever we allow our own physical impulses to be expressed without moderation and without regard for purpose, we too are subject to disorder and confusion. Any expression of force must be linked with a rational purpose and must be appropriate to an end. Behavior must always be consonant with moral standards.

As the ThunderCats series wore on, certain themes and concepts found themselves being revived and reinvented. When the series ended there were a total of 130 episodes, and one could argue that it could be difficult to sustain that many episodes without certain elements being revisited! It is unsurprising, then, that this episode bears a lot of subtle similarities to “Safari Joe”. However, while that episode was a highly entertaining tale with many exciting and original concepts, “The Demolisher” is basically a sequence of ongoing action sequences strung together around the episode’s guest villain. While for a high-octane adventure show like ThunderCats this does not necessarily have to be a bad thing (especially given that action sequences were one of this series’ great fortes), in the case of this episode the result is surprisingly bland and uninteresting.

Part of what makes this episode suffer is the fact that the eponymous character is quite a one-dimensional one. One of the few weaknesses of the ThunderCats series (and, indeed, that of many animated series in the 1980s) is that the villains are rarely given any substantial character development or motivation for their actions. Boiled down to their base components in order to make them instantly accessible to their young audience, they are simply “evil”. In real life, of course, very few people who do evil things actually think of themselves as “evil”—they will rationalize their behavior, seeing their deeds as motivated from a good place. Evil cartoon characters often lack this level of complexity, delighting in their own evilness in a way that caricatures the “villains” of real life. Although watching ThunderCats from an adult perspective requires some suspension of disbelief, over-the-top villainy is rarely a problem—we can overlook it, even delight in it for its melodrama. In the case of the Demolisher, however, it feels as though this lack of character complexity is extended to the point of complete lack of motivation—a character who just looks evil and fights for the sake of fighting, with no backstory.

I mentioned earlier that “The Demolisher” bears some minor similarities to “Safari Joe”: an adversary packing a versatile arsenal of weaponry attacks the ThunderCats (or, in the case of this episode, just Lion-O) for no apparent reason other than satiation of ego, complete with a non-combatant sidekick. However, while big game hunter Safari Joe was a brilliant and highly appropriate enemy for a cast of humanoid cat characters, whose own cowardice and bullying nature marked him out as a really interesting character, the Demolisher is basically just a savage warrior, existing for no reason other than to fight. The episode touches briefly on his motivations for doing so (which, as with Safari Joe, appear to be largely ego- or superiority-driven), but the way they’re presented is less interesting and engaging than with “Safari Joe”. Couple this comparative blandness with a somewhat pointless cheerleader sidekick in Dirge (Safari Joe’s sidekick, Mule, at least served a necessary and believable function), and you have the wrong characters to base an entire episode around.

The sad thing about this episode is that it could have been excellent, not just because it originates from the combined talents of Peter Lawrence and Bob Haney, two of Season One’s strongest writers, but also because the character of the Demolisher, as a type of mindless soldier, could have served as a fantastic character around which to build a tale about the futility of conflict, and how wars and conflicts can escalate to the point of mindless violence where neither side can truly remember the reason it started. By making the Demolisher a fighter in a long-forgotten cause, or a soldier from another time, or any such plot device, this episode could have been lifted from mediocrity to one of the great ThunderCats stories. As it is, the episode is memorable almost solely for its action sequences. While this might sound harsh, action sequences comprise almost the entire episode, with two large one-on-one battles—Demolisher vs. Mumm-Ra and Demolisher vs. Lion-O—forming the central columns upon which the remaining minor framework of the episode is built.

The action sequences themselves are entertaining, if somewhat unspectacular. The Demolisher’s arsenal of weaponry is perhaps the most memorable thing about the character, giving him a formidable edge to match his cruel personality and snarling voice. Although at no point does the audience feel that Lion-O is in legitimate danger, it is nonetheless entertaining to watch the Lord of the ThunderCats give such a comprehensive display of his combat abilities. In particular, the scene in which Lion-O displays his awesome (perhaps even slightly overplayed) strength, breaking free of the Demolisher’s forcefield and then dragging his ship down to earth, is the undeniable highlight of this episode.

In short, despite impressive action, this episode stands out for all the wrong reasons, by virtue of its horrendous guest character. It is an episode brimming with wasted potential and one that, even when analyzed, remains rather forgettable.