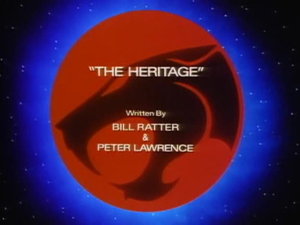 What’s in a name? That which we call a rose by any other name would smell as sweet. While a moniker may not mean much to Shakespeare’s star-crossed lovers,it is of paramount importance to a screenwriter. A good title can be the name of a character, a central item, or the main theme of the story, but its purpose, apart from conferring an identity to the work, is to intrigue and attract an audience. The title of this episode promises one thing but delivers something entirely different, and not in a good way.

“The Heritage” opens with the ThunderKittens stumbling onto a glowing golden orb, which also attracts the attention of the scrap metal collector Char as he cruises past in his Flying Furnace. Touching the orb brings out the evil side of the ThunderKittens, filling them with greed. Char experiences a similar possession when he holds the orb after forcefully snatching it from the Wily twins using his ship’s giant magnetic probe.

The orb happens to be the Golden Sphere of Seti, a potent globe that had quadrupled Mumm-Ra’s powers when it was in his possession, three Thunderian ages ago. Drooling even more than usual at the mere thought of experiencing such might once again, Mumm-Ra summons the Wicked Winds of Thundera to bring down the Flying Furnace before heading out to claim the sphere from Char. Just as Mumm-Ra locates the aureate orb in the wreck of Char’s crashed ship, the ThunderCats make their entrance. With his powers now multiplied by a factor of four, Mumm-Ra welcomes the Cats with a powerful blast from the sphere, shattering the Sword of Omens. The victorious villain flies away while the ThunderCats graciously repair the Flying Furnace, and in return for the favour, Char reforges the sword.

Back inside his Black Pyramid, intoxicated by the power of the Golden Sphere, Mumm-Ra gloats about his new found strength to Ma-Mutt while at the same time ridiculing the Ancient Spirits of Evil, calling them redundant, useless relics of a bygone era. Not pleased at being mocked, the furious spirits snatch the sphere from Mumm-Ra and send it floating out into the open. What follows is a three-way mad dash for the golden orb between Mumm-Ra, Char and the ThunderCats at the Canyon of Churning Rocks. With a little bit of cunning and agility, Mumm-Ra grabs the sphere and flies with it back to his pyramid but is refused entry by the Ancient Spirits of Evil. The irate foursome slap Mumm-Ra with an ultimatum – abandon the sphere or remain locked out of the pyramid forever. The sobbing mummy reluctantly opts to let go of the sphere, which the Ancient Spirits destroy before teleporting him inside.

Even with two writers at the helm, “The Heritage” is a disappointing retread of the formulaic ThunderCats plot which involves the protagonists and the antagonists vying for an ancient magical item with incredible power. “The Totem of Dera”, “The Chain of Loyalty”, “The Bracelet of Power”, and “The Crystal Canyon” are all characterized by the same basic storyline, which would explain why the writers of this episode, in an attempt to make it stand out, chose an intriguing albeit misleading title for it.

The episode is split into two repeating scenarios, Mumm-Ra besting the ThunderCats and Char, and making off with the Golden Sphere of Seti. Unlike “All That Glitters”, the breaking of the Sword of Omens is depicted as a very bland event, thrown in only to justify Char’s presence in the episode, who otherwise has little to do. The powers of the orb are also unclear. Said to quadruple the strength and size of its possessor, the sphere does no such thing to the ThunderKittens or Char. Even Mumm-Ra remains his normal size, and despite claiming that with the sphere in his grasp he does not need the Ancient Spirits of Evil, he still returns to the pyramid and invokes them whenever he wants to change to his ever-living form.

The most bizarre aspect of the episode isthe ending, in which the ThunderCats let Mumm-Ra escape with the Golden Sphere of Seti despite being fully aware of its destructive powers. Instead they opt to remain extra careful the next time they have to deal with Mumm-Ra. The interactions between Mumm-Ra and the Ancient Spirits, while interesting and novel, aren’t sufficient to elevate the quality of this mediocre installment.