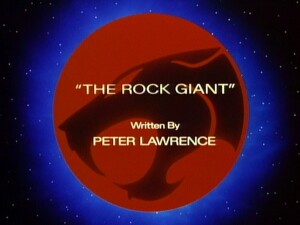 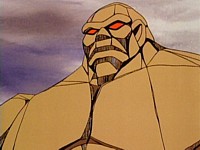 This episode teaches us respect for the forces of nature and how learning about nature and the basic laws of physics can be useful. The ThunderCats are forced to deal with electrical storms with thunder and lightning, volcanic eruptions, magnetic fields, and earthquakes, which are unleashed by the Rock Giant. In the beginning of the episode, WilyKit and WilyKat learn from Lion-O the practical benefit of not standing under trees in a thunderstorm. Later, Lion-O uses the basic laws of expansion and contraction brought about by the heat and cold of fire and water to destroy the Rock Giant.

The knowledge that we learn in our education serves a practical purpose in helping us live our lives. We should strive to learn all we can about natural science so that we can use the forces of nature to our advantage and be safe from their dangers.

On paper, “The Rock Giant” is a ThunderCats episode with a paper-thin plot. Essentially, a raging storm awakens a sleeping rock giant whom Mumm-Ra launches against the ThunderCats. The feline heroes struggle to defeat the giant, but ultimately prevail against it. And yet, somehow, this episode sparkles with so much of the magic that permeates the entire series that, even though this episode probably is weaker than much of Season One, it still provides for an entertaining and captivating ride.

From the first few moments, this episode grabs the audience’s attention, with great, booming and eloquent dialogue from Mumm-Ra and his transformation sequence appearing early on. The devil priest is at his malevolent best here, oozing evil and might as he calls on the power of the Rock Giant to attack the ThunderCats. Often the quality of an episode of ThunderCats can be measured by how good an outing that installment is for Mumm-Ra, but in the case of this episode it is perhaps slightly misleading. In the context of its slightly weaker plot, Mumm-Ra here is a comprehensive show-stealer, displaying not just menace and power but also showcasing an aspect of the character that at times was forgotten throughout the series: that of a powerful sorcerer not always attacking directly but manipulating and setting events in motion from afar.

The character of the Rock Giant itself is a fairly straightforward one. Whereas it would not be unusual to create a slightly tortured character from the frightening giant—a character who acts out of fear or self-defense rather than evil—in “The Rock Giant” Peter Lawrence leaves no doubt that this giant is an evil creature, hell-bent on destroying the ThunderCats for no reason other than that they are Mumm-Ra’s enemies. Whilst this makes the character somewhat one-dimensional, it does lessen the otherwise potentially traumatic conclusion of this episode, in which the Rock Giant is destroyed by Lion-O. In fact, in and of itself, the manner in which the Rock Giant is defeated brings up its own debate. Was the Rock Giant ever truly “alive” or was it merely rock animated by mystical forces? If, in fact, the Rock Giant was “alive”, then is Lion-O killing the creature? Although death is rarely tackled head-on in ThunderCats it is actually addressed more times than one might think, with several nameless and forgettable evil creatures (and even a couple that are not so nameless or forgettable) running, falling or generally meeting their doom off-camera. In this episode, the destruction of the Rock Giant is actually quite graphic, but the ambiguity is whether or not the creature was ever truly alive, something that, from the events of this episode, could never really be answered conclusively.

Earlier I mentioned that this episode has quite a thin plot, and I reiterate that point now. There is nothing complex or especially interesting about this episode. It is primarily a straightforward action episode with very few (if any) major plot twists. However, it is worth remembering that exciting action sequences are one of the hallmarks of ThunderCats, and the show’s ability to execute such sequences better than most of its peers are what many fans remember most fondly about the series. This is no less true of this episode, which expertly choreographs one engaging action scene after another, utilizing the looming Rock Giant threatening to crush all in its path and crafting sequence upon sequence on this simple premise in a gloriously cinematic fashion. That this works as well as it does is a tribute not just to the individual animators and directors who worked on those sequences, but also to how well the production team were able to synchronize the visuals on screen with Bernard Hoffer’s exciting music track. The music on ThunderCats was another major element of the series’ success, and this episode makes good use of it.

Another great masterstroke by writer Peter Lawrence was setting this episode in the middle of a torrential and violent storm. Having the ThunderCats battle the weather as well as the Rock Giant not only adds another dramatic element, but also creates a threatening and ominous backdrop that amplifies the Rock Giant’s menace—he truly is a creature spawned from the furious elements, an impression reinforced by his fire-breathing abilities!

Could this episode have been improved upon? Probably. Adding some other plot twist at just the right moment would have further complemented the outstanding action sequences and brought a whole new dimension to this episode. However, this episode nonetheless bears many exciting ThunderCats trademarks and is likely to entertain anyone who enjoys a good dose of action with their animation!