The Slaves of Castle Plun-Darr 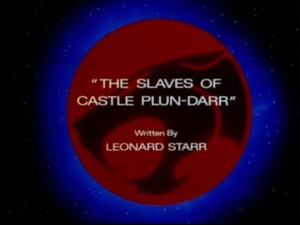 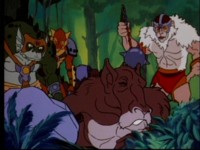 The ThunderTank is given a trial run as the THUNDERCATS attempt to liberate the BRUTEMEN from slavery. The MUTANTS are using them to build the evil Castle Plun-Darr S-S-SLITHE uses “Warp Gas” to turn the otherwise meek BRUTEMEN into raving monsters. Using the Sword of Omens, LION-0 sees PANTHRO in trouble. The sword forms an energy field which pushes the Warp Gas back at the MUTANTS, who themselves become meek. The BRUTEMEN are freed and the THUNDERCATS have once again triumphed over evil and tyranny.

Freedom is a basic personal right that must be respected. Lion-0 learns the enslavement of others for one’s own purposes is to be resisted. And he knows that the rightness of actions carries its own reward apart from any reward or gratitude that might be received from others.

The highest level of moral conscience is that in which the moral value resides in conformity by the self to shared standards, rights and duties. It is a level beyond that in which moral value resides in performing good or right roles, in maintaining conventional order, and in the expectancies of others. At the highest level, morality is based on universal principles (Kohlberg, 1963).

This episode is a very hard one to summarize, because, like “Berbils” (the episode that immediately precedes it), it’s an episode you have to look at in context. The plot of the episode is actually quite simple—the Mutants enslave a race of simple beings to help them build a fortress, and the ThunderCats have to free the Mutants’ slaves. There are other episodes in the ThunderCats series that are more imaginative in their scope, but where this episode is both essential and excellent is by setting the tone for the rest of the series, and moving the series on in continuity terms by showing both the ThunderCats and the Mutants properly establishing themselves on Third Earth.

This episode could almost be regarded as the first “regular” episode of ThunderCats—whereas the first three episodes focus on the ThunderCats’ fleeing Thundera and trying to build a life for themselves on Third Earth, “The Slaves of Castle Plun-Darr” is actually the first episode that shows them being truly proactive in the defense of their new homeworld’s people. Whilst they did defend the Berbils from their natural enemies, Lion-O’s initial involvement in that was an accident, albeit an accident with highly fortunate consequences—whereas, when the ThunderCats hear of the Brutemen’s enslavement, they do not hesitate to leap to their defense. For the ThunderCats, this would be the start of a long process of making friends and winning over the various peoples and races of Third Earth, a theme revisited many times throughout these early episodes.

Although easy to overlook, this episode is also full of lovely character touches that help to further acquaint the audience with the show’s feline heroes. The opening scene showing WilyKat and WilyKit playing amongst the trees is a delightful one, showing how adaptable the young Thunderkittens are and how the innocence of youth enables them to instantly take enjoyment and excitement from their new surroundings. This episode is also a fantastic showcase for Lion-O, showing how quickly he’s maturing and slipping comfortably into his role as Lord of the ThunderCats before our eyes. Lion-O is still full of lion-like pride, the scene where he refuses to run from the Brutemen showing that his pride is still yet to be fully tempered by wisdom. And yet somehow Lion-O seems increasingly comfortable interacting with his fellow ThunderCats, looking less and less like a child in a man’s body and more like the confident leader he will become.

Although it could be argued that this episode is possessed of a somewhat unimaginative plot, in my opinion a more complicated storyline would simply overshadow some of the important things that take place in this episode, such as the ThunderCats growing into their roles as protectors of Third Earth, the character development mentioned above, and also several important scenes showing the ThunderCats and Mutants establishing themselves on Third Earth with their respective bases, Cats’ Lair and Castle Plun-Darr. The two bases are shown to the audience within minutes of each other, and the contrast between the two is stark—whilst Cats’ Lair is surrounded by sunny daylight and clear skies, Castle Plun-Darr is shrouded in gloom; and whilst Cats’ Lair stands proud and upright, the Mutants’ fortress assumes a menacing pose. The absence of Mumm-Ra from this episode is also a clever move, as it focuses the audience’s attention on the two alien races on Third Earth, the ThunderCats and the Mutants. With the two parties properly established on the planet, battle is truly ready to commence!