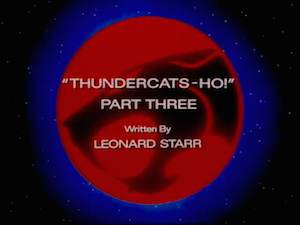 Parts One and Two each featured some excellent animation sequences, but they pale in comparison to this episode. “ThunderCats Ho! Part Three” is the crown jewel of this five-parter,[2] and it’s worth careful viewing on the basis of its animation alone. Almost every scene is exceedingly well-directed and animated, as if all the animators sat down and agreed that this was going to be the episode where they would focus their best efforts. One can hardly blame them—it features some of the most suspenseful and energetic action sequences in the entire series.

The cliffhanger at the end of Part Two—Lion-O versus the Fistpounder—is quickly resolved, as the Fistpounder’s thundering starts an avalanche. Monkian and Snowman are both able to outrun it, but Lion-O is on foot. He is shown in shallow depth of field, running toward us. This long lens effect compresses distance and highlights the futility of his sprint, even as the camera zooms out to dwarf him, and the shadow of the advancing avalanche stalks and overtakes him. As a last ditch effort he drops to all fours like a cat, a cute touch; but the torrent of snow consumes him. The Sword is ripped from his grasp, and when it lands, there’s a lovely rack focus over to Lion-O sliding by out of reach.

The avalanche ends at magic hour, setting Hook Mountain against a sky of golds and purples, and bathing everything in a hard, warm light. This light results in beautiful and fairly consistent shadows for all the scenes that follow. The first scene is a classic: Lion-O calls the Sword to free him from the ice.[3] Set to one of Bernard Hoffer’s oldest and most majestic cues, we get Lion-O’s POV of his outstretched hand against the sky, the Sword breaking through in a blazing pillar of light, and shards of ice flying toward camera as Lion-O is finally freed. This leads into the series’ first and only re-drawing of the stock ThunderCats Ho! sequence, set against an exquisite background of clouds.

The beauty continues unabated, but there are some highlights. Snowman and Monkian have never looked better while duking it out in the cockpit of the Fistpounder. We also get another stylized freeze-frame, this time of the ThunderTank going up against the Fistpounder at the act break. The animators save the best for last, though, with the mummy-wrappings chase sequence. Easily the most terrifying cliffhanger thus far, every shot—even the quick inserts—is expertly directed and animated. The end result is a gorgeous, fast-paced thrill that ranks among the best executed and most memorable action sequences in the entire series.

Animation aside, this episode features some enjoyable character moments, too. Lion-O noting that Tygra is “too good at this” as he tries to steer the SkyCutter out of the HoverCat’s line of fire is spot on, especially following Tygra’s own head-scratching at the SkyCutter’s evasive maneuvers. The Thunderians, meanwhile, continue to demonstrate fierce loyalty and determination in their efforts to escape.[4] Pumyra shows it best when S-S-Slithe manhandles and then insults Lynx-O. Her stern “Lynx-O cannot see!”, followed by her cutthroat “Handle this, reptilian!” as she dropkicks him, make this reviewer want to stand up and cheer every time. The Mutants have some noteworthy moments, too, including Vultureman’s pride in the Fistpounder, Ratar-O’s shrewd analysis of Panthro’s tactics, and S-S-Slithe’s sarcastic indication of Jackalman’s laziness.

A few quibbles. Lion-O playing possum during S-S-Slithe’s attack is kind of a dirty trick. For that matter, throwing Ma-Mutt down the corridor is a bit un-ThunderCat-like, too. Who throws a dog? Also, I can’t decide which is worse: Captain Shiner’s “pretty pair” remark about S-S-Slithe straddling Jackalman, or S-S-Slithe’s violent response to it. I know it’s not virulent, intentional homophobia, but it irks nonetheless. Let’s not end on a downer, though! This episode is fantastic overall—a study in detailed animation from start to finish. The five-parter peaks here.

2 ^ One would think that the animators would save their big guns (and budget) for the more climactic scenes at the end of Part Five, but they did not. They likely saw greater opportunity to showcase their talents here.

3 ^ One should point out that being encased in ice doesn’t quite follow from being buried by an avalanche.

4 ^ It is odd that Bengali and Pumyra don’t help Lynx-O after this incident, but rather flee in a separate directions and leave him behind.