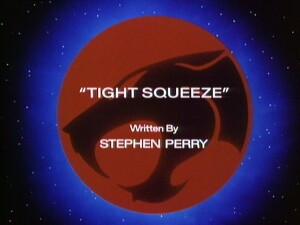 This episode depicts the importance of technology in our modern way of life and the necessity to use it in conjunction with a moral code. When Vultureman activates the self-destruct circuits in all their weapons, the Mutants are left only with primitive instruments. They call upon Mumm-Ra, who seals off the ThunderCats from their weapons and short-circuits the Lair’s controls. Assured the ThunderCats are weaponless, the Mutants set out to attack them on what they think will be equal footing. But the ThunderCats, led by Lion-O, call upon their inner resources and allegiance to their values. They have always lived with the guiding principle that technology is a means to be used in conjunction with a just end. Their ends are determined by their moral code, which is exemplified early in the episode when they display a willingness to save even their enemies. Fortified by their inner strength, the ThunderCats withstand the attack. Lion-O is reunited with the Sword of Omens, which represents their code and the proper use of technology. He frees the ThunderCats and their weapons, and they repel Mumm-Ra and the Mutants, who lack a comparable morality and inner strength.

We learn in this episode that an inner strength and power is available to us in our lives when we live according to a code of values. When we follow a code of morality based on conscience and the betterment of society, we act in confidence and with an inner strength. Part of a moral code involves reflection on how society links the tools, weapons, and instruments of modern technology with ends of a value system, which respects life and justice. The evaluation is a judgment about how to use technology, which as a means can be used for various kinds of ends. A right morality will assure that technology is used for the benefits of good in society and not for destructive purposes.

How important are the ThunderCats’ weapons to them? It’s a very valid question – when we see the ThunderCats arrive on Third Earth they are, contrary to what one might think, not seasoned combatants but instead Thunderian nobles who are forced to take up arms to defend themselves against both their enemies and against a potentially hostile environment. That they are able to do this so successfully is thanks in no small part to the protective clothing and special weaponry bestowed upon them by their deceased leader, Jaga, at the start of their enforced pilgrimage from Thundera to Third Earth. The brilliance of this episode, from the pen of experienced ThunderCats scribe Stephen Perry, is it explores exactly how vital (or not) that weaponry is.

If this episode had one aspect that didn’t ring quite true, it would be that the Mutants’ scheme, to divorce the ThunderCats from the weapons and technology that they so rely upon, feels like it should have taken place much earlier in the series – indeed, one can’t help but wonder if, somehow, the origins of this episode appeared much earlier in the series’ development but didn’t come to fruition until this much later stage.

Nonetheless, thanks to the highly engaging and convincing way that the main events of this episode are framed, it’s easy to forget this minor point, and indeed in many ways the events that lead up to the main plot point of the episode actually serve to make the episode stronger – for, not only does it subtly showcase how integral Vultureman’s input into the Mutant team has become since his debut, but it also starts the episode off with a gloriously exciting action sequence that captures the audience’s attention right from the get­go, thus making all the episode’s exposition concise and very logical.

The storyline of this episode takes so many twists and turns that by its conclusion it almost feels as though several episodes have taken place! However, all of these plot twists are clear, logical, and, most vitally of all, serve to keep the episode fresh, engaging and entertaining. In addition to this, the other strong point of the episode’s plot is that it adds a tangible sense of menace back into the characters of the Mutants – for, it is quite correct that the Mutants are formidable fighters when dealing with basic, simple weaponry such as spiked ball­and­chains, axes, clubs, etc., whereas the ThunderCats rely very heavily on the special properties of their weapons, not just the all­powerful Sword of Omens but also Cheetara’s staff with its extending powers, Panthro’s fighting sticks with their abilities to shoot special gasses and other such powers, and so on.

Much earlier in the series, the ThunderCats were able to use these weapons, along with other technologically based weaponry found within the Thundertank and Cats Lair, to gain the advantage on their Mutant foes – when the Mutants gained access to their spacecraft and other vehicles, the audience’s attention was drawn to the fact that this had equalised the balance of power, yet over the following episodes the writers tended to stray away from this. This episode sees a return to that concept (ironically, when Vultureman’s tantrum again strips the Mutants of their technology), and the result is, simply, fantastic.

Of course, one of the primary themes of an episode like this is the exploration of inner strength, and it’s fitting (as well as returning to a tried and tested ThunderCats theme) that this should be so perfectly exemplified by Snarf, who succeeds in using his diminutive size to save the day by recovering the ThunderCats’ weapons. However, the episode also shows how much the ThunderCats rely on raw courage, strength and determination, and that even when the chips are down they refuse to give up – had Tygra and the Thunderkittens both been present when the action was taking place, perhaps their force of numbers would have overcome the Mutants, yet the clever plot device of having them away piloting the Feliner adds both an extra sense of drama, and a sense of realism to the Mutants’ overpowering of both Panthro and Cheetara.

This episode also has the distinction of being not just extremely well­animated, but also directed very well, with a lot of clever use of camera angles and different shots creating tension and excitement within the episode – indeed, from a visual perspective, the episode has a true “comic book” feel and is one of the most technically accomplished of the series so far. Another visual aspect of note is how effectively the scene of Jackalman pursuing Snarf within the ventilation shaft of Cats Lair is utilised – the palpable sense of claustrophobia is so real as to make this writer shiver at the sight of it!

This episode is one of the very finest from the latter end of ThunderCats’ first season – brilliantly executed from the first frame to the last, it defines what makes this series stand out from its contemporaries.