On the 29th of July, 2011 Warner Bros. Animation launched the all new ThunderCats series! To accompany the animated series, Bandai America Incorporated and Warner Bros. Consumer Products teamed up to bring us a new line of toys based on the re-imagined ThunderCats universe!

“As this sweeping story of heroism takes on a 21st century re-imagination, Bandai America is thrilled to offer fans a chance to experience the ThunderCats adventure through our innovative collection of toys, Each item in the ThunderCats toy line is crafted with great attention to detail and designed to provide an interactive, imaginative play experience for fans of all ages.”  (Read the full release here.)

Right out of the gate, BanDai produced a large line of action figures, vehicles, a playset, role play toys and much more. Two waves of regular and deluxe action figures were released, as well as a 6 inch line and a ThunderCats Classic line. The 4 inch scale figures and vehicles have a pretty cool feature called ThunderLynx. These figures and vehicles all have a magnet activation system, meaning they all have magnets embedded in them, which unlock and activate various features, such as sound and lights. The 6 inch line features a selection of figures from the 4 inch line, but with more points of articulation and a more detailed sculpt and paint job. The Classic line was designed to give fans the first ThunderCats action figures based on their appearance in the classic 1985 animated series. A full checklist, including product numbers and package variants, can be found here!

Unfortunatly  the line did not last very long.  In 2012, when BanDai did not show any new items at the New York Toy Fair, rumours started spreading that the ThunderCats line was cancelled. When online retailers started to lable the line as Discontinued, what many fans feared seemed to become reality: no more ThunderCats.

So even though the line is now cancelled, a lot of great toys were produced and are out there to be collected by ThunderCats fans old and new alike!

As of fall 2014 BanDai America no longer produces ThunderCats merchandise, but curiously enough the licensing agreement with Warner Brothers is still standing in Latin America. As a result some peculiar items have popped up.

A toy company in Brazil called SUNNY has produced a number of ThunderCats figures, licenced by BanDai. The figures are basically the same as the BanDai America releases, with a few MAJOR differences. They have far less points of articulation, three to be exact, far less deco/ paint application and less accessories.

The card is also basically the same as the “regular” releases. The only major differce, appart from the language and logo’s, is the bubble: it’s square as oppose to round. 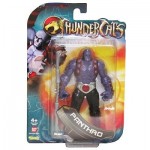 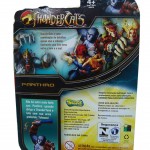 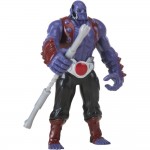 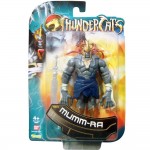 Before these fantastic figures end up in their blister-cards and our toy shelfs, a lot of work has gone into them already. After the initial designs and prototypes, molds are made. These molds are tested to see if everything is alright and every detail of the sculpt will be translated to the final figure perfectly. These testshots are usually done in random coloured plastic they have available at that moment. These figures are not meant for sale or distribution of any kind, but some tend to make it to the secondary market.