First teaser image for the line

In May of 2008 Jerry Macaluso, owner of Pop Culture Shock Collectibles (PCS) answered a question on a popular statues forum when asked about his wishlist of development projects. At the top of that list was ThunderCats. Just a short time later, in March 2010, Jerry was able to make another ThunderCats pronouncement. In his words: “When I started out I would always say Thundercats was my dream license. The line I wanted to do more than any other… sometimes dreams do come true.”

Jerry acquired the license for 1:4 scale ThunderCats which is a large format in terms of statues including the base, the full statues usually stand at over 30 inches (over 75cm). Most action figures are between 6-8 inches, so you’re dealing with beastly sized ThunderCats when you shop with Pop Culture Shock. 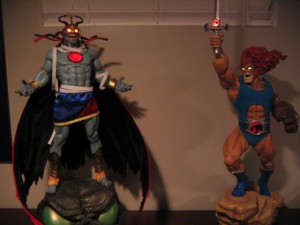 Jerry Macaluso, a successful sculptor and movie developer / producer, started PCS to realize his long time passion for developing high quality collectibles. As a fan of the ThunderCats and comic books, Jerry drew inspiration for his statue line from the Ed McGuinness artwork from the popular Reclaiming Thundera series. The statues are done using mixed media, meaning that the clothing is not simply painted on, but is made up of fine material that is delicately stitched and attached to complete the final look.

Each statue came in a regular edition and a limited edition. The more expensive limited editions included light up features, like Lion-O’s eyes and the Eye of Thundera. The Tygra limited edition came with an alternate head which could be switched with the regular version, to attain a more menacing look if the owner preferred. The statues were priced between $350 and $375 and were sold through Sideshow Collectibles.

According to Jerry there were as many as six ThunderCats characters either produced or in development at the time that the line was cancelled. Lion-O and Mumm-Ra were produced and shipped to buyers, Tygra was completed and shown at the 2012 San Diego Comic Con and went up for pre-orders. A finished Cheetara prototype was revealed on Jerry’s facebook page but was withheld from pre-orders because Jerry and the sculptor Khurram Alavi wanted to make improvements on her. Jerry reported that work on Panthro was well underway and that he was personally sculpting “very special” but he never revealed what that was.

On Oct 3, 2012 Sideshow Collectibles sent an e-mail to everyone who had pre-ordered Tygra to announce that production of the statue was cancelled. Jerry announced on that same day that the line was cancelled due to low pre-orders on Tygra, having less than 50% of the numbers needed to go into production. With their license due to expire at the end of that same year, Jerry had made the decision to cancel the line altogether. Jerry shared the following thought with collectors: “Im truly sorry as i had high hopes for the ThunderCats line, but it seems that most fans only wanted Lion-O and Mumm-Ra.”

Filed under: Ministry of Information / Miscellaneous

You can now find these items in our store. Use the link below to purchase.