An Interview with Jerry Macaluso

We recently had the chance to ask Jerry Macaluso, the owner of Pop Culture Shock toys a bunch of questions about their new ThunderCats line. Jerry was kind enough to spend time answering the numerous fan submitted questions. Here is the interview:

Jerry, congratulations on securing the license to create statues for what we at ThunderCatsLair.org consider to be the best cartoon property of all time. From everything we’ve seen of Pop Culture Shock’s previous work and the photos you’ve released to ThunderCatsLair.org, fans are in for an incredible ride. Thanks too for agreeing to take the time to answer fan questions about your plans for the statue line.

I was 17 when ThunderCats hit so my attraction was mostly about the character design. Ive always thought the concept of cat-people was a great one and Thunder Cats did it exceptionally well. Tygra’s design was my fav Thunder Cat as I love tigers. Im a huge fan of monsters (used to do special effects) so the Mutants were always my main favorites. They are some of the coolest designs I had ever seen. I used to sit in front of the tv with my clay and try and sculpt them. Wish I still had pics of those. Out of the Mutants Im going to have to go with Slithe though Mumm-Ra in Ever Living form is really cool.

Q2) We understand that the ThunderCats license was hard to acquire (and not cheap). Can you tell us a bit about the terms you and Warner Brothers agreed to?

I first contacted WB in 2003 when my old company SOTA Toys was gaining popularity. I couldnt believe no one was doing anything with the property. At the time I wanted to do action figures to go along with my Street Fighter action figures. Unfortunately Thunder Cats was not on WB’s list of properties they wanted to license as I believe they were waiting to tie it in with a new show or movie. I tried to change their mind every few months to the point where Im sure I became annoying.

Several years later I started Pop Culture Shock Collectibles to focus on statues and I saw that Hard Hero was doing a Lion-O…I flipped and dug out my old WB contacts. They got right back to me and even remembered that I used to pester them several years earlier. I was pretty happy they remembered my enthusiasm. We met and the deal went very smoothly. It is for three years and it only includes 1/4 scale statues though we are discussing other things.

Q3) Who is the sculptor behind the Lion-O statue, and how did you know he was the right dude for the job? 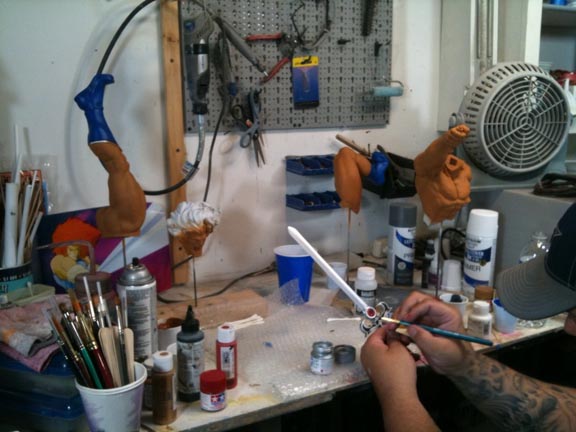 Khurram Alavi sculpted Lion-O and I think he did a fantastic job. It was our first time working together but I have seen his previous work for Sideshow and Bowen and was impressed. We have since done several more projects and he is working on the next Thunder Cats statue as we speak.

Q4) As you know there has been a lot of news breaking in the past few weeks, such as a new cartoon under production with Warner Bros and a new line of action figures were recently announced also. Two other companies are producing statues and stactions of the ThunderCats. Fans are uproariously excited about the revival of the ThunderCats. Could you comment on how this revival has or might affect your design decisions?

When I did my deal with WB we discussed what style these statues would be in and how they would fit in with what other companies are doing. As much of a fan of the cartoon as I am I thought it would be great to try and do an Ed McGuinness style on these statues. I think other companies are doing a great job at capturing the animation look and at the large size and high price point that I am focusing on, the collectors want detail and McGuiness style has lots of detail. It seems like right now there is something coming for all Thunder Cats fans.

Do you expect to be asked to incorporate changes to characters designs coming out of the new show?

Not at all. While WB is going to promote the heck out of the new show they also understand that the fans want other versions of the Thunder Cats as well.

Will there be a separate line of statues based on the new show? 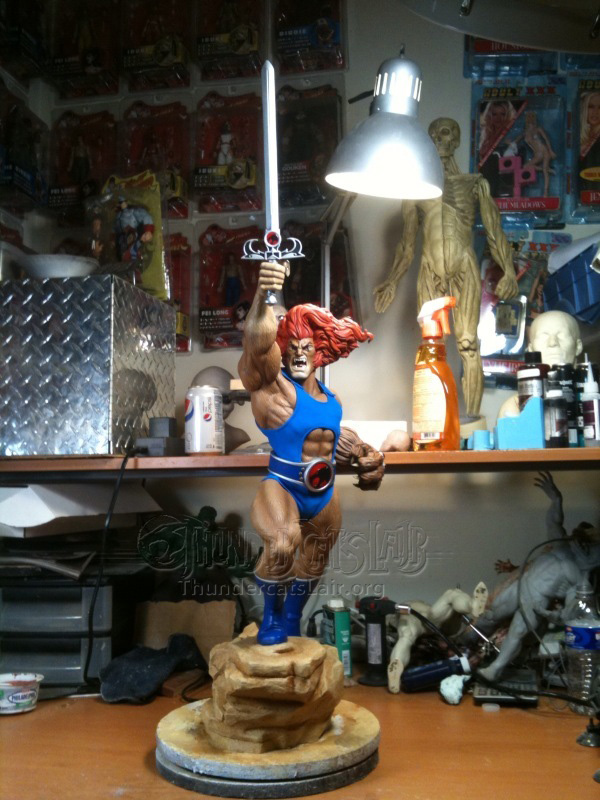 Q5) You’ve mentioned that Lion-O’s pose was inspired by Ed McGuinness’ cover to issue #1 of the ThunderCats Reclaiming Thundera comic books he drew. This pose was perhaps in turn inspired by the first frames of Lion-O from the cartoon introduction sequence. How do you anticipate you and your team will choose poses for upcoming characters?

That is a good question. Hard Hero has a year head start on me and they seem to be choosing very iconic poses. Cheetara is a perfect example. I dont want to just do a larger version of what they did so I am looking through the comics for poses as opposed to the cartoon. I am very open to the fans suggestions on future character poses.

Q6) Speaking of upcoming characters, everyone is in knots of anticipation wondering who is next in line. We know you know, so will you do the reveal for us? Who else should we expect to see next in the line?

We are actually working on two characters at once and whichever is finished and approved first will be next. Cheetara is one of them and I will leave the other as a future surprise.

How do you and your team decide which character to do next, and can ThunderCatsLair.org and the forum members help in any way with your choices?

I absolutely love to hear the fans suggestions. When I choose a character I try to balance who the collectors will want with who I want with who my sculptor may have the most fun sculpting.

Q7) Pop Culture Shock is well known for adding Exclusives to accompany the main statue. You’ve confirmed that it won’t be Snarf that you’re including with Lion-O, can you give us a hint or an update on what you’re planning?

Will Lion-O’s sword have a light up feature?

This is the most likely exclusive. I dont want to put a light up eature in the regular version as it bumps the price significantly. So a light up feature on a limited run seems to be the best option.

Q8) Will your statues be divided into a regular edition and limited edition format (such as Artist Proofs) or will they be released as a single edition?

There will be two editions. Regular and Sideshow Exclusive. I do make Artist Proofs but I generally dont sell them to the public. They are for the people who were involved in creating the statue as well as WB. 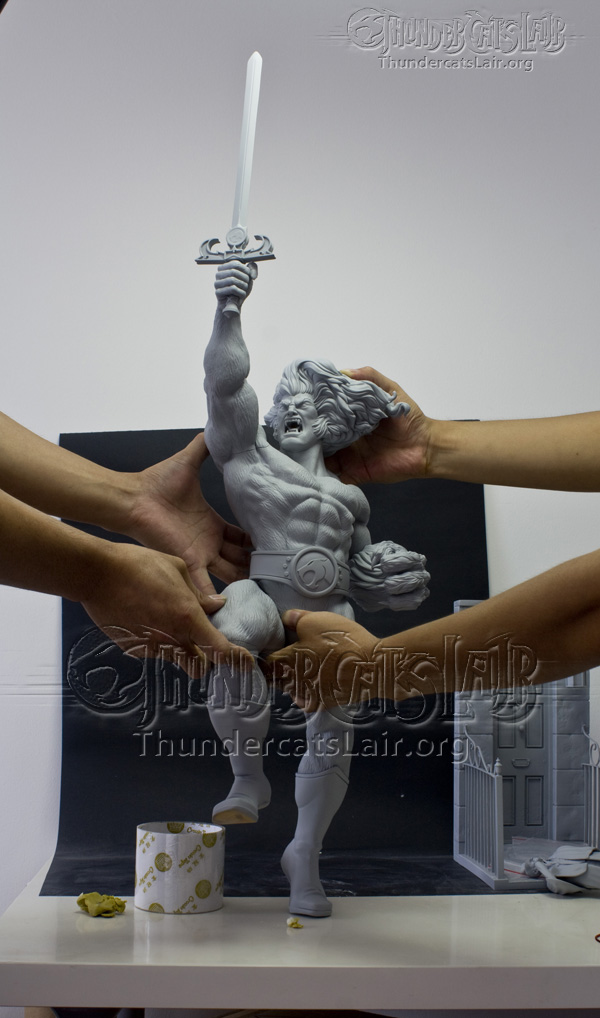 Q9) Some fans have commented on the choice to add fangs to Lion-O which seems to be drawn from McGuinness’ style and to some people’s mind makes him resemble Marvel’s Sabretooth. The cartoon Lion-O and the LJN classic figure depict a more demure Lion-O. Could you comment on the choice?

Its basically what I talked about earlier. WB and I discussed the style and we thought my sensibilities would really lend themselves to McGuiness style which does have the fangs. The comics were pretty well received so Thunder Cats fans seem to accept the fangs at the time. I guess if someone loves everything about the statue except the fangs it wouldnt be too difficult to sand them down and touch up the paint.

Q10) Hardcore ThunderCats fans tend to be purists who have a healthy dose of respect for the original property and resist creative changes to their precious characters. How do you walk the fine line between infusing new creativity into Pop Culture’s version of the characters, and paying homage to the original?

This is something I have run into many times in the past with Street Fighter. I understand and accept the purists position but I also think there is nothing wrong with taking some artistic license as long as the essence of the character is left intact. Obviously that is going to be subjective but I like to think that we are be respectful to Thunder Cats. Plus it seems like Hard Hero is doing a good job of being closer to the original animation style.

Q11) Many of the site visitors are not familiar with the Premium Format statues that Pop Culture Shock creates, and the concept of using mixed media. Could you explain a bit about the format and how it is different from traditional statue lines? For example, you’ve mentioned that Lion-O’s outfit will be made of cloth…

Yes Lion-Os costume will be cloth. The cloth elements to my statues are sort of a love it/hate it element. I dont mind that because the people who love it really love it and you cant make everyone happy.

Q12) The statues are very large compared to what fans have seen before. How do collectors of the Premium Format statues typically store and display them?

These statues are usually the centerpieces of peoples collections. Many build custom cases for them. They are intended to not be out of place in a nice upscale home. I have Lion-O sitting in the center of my mantle right now and everyone who walks in immediately gravitates to it. Its 32″ tall and has a fantastic presence.

Q13) Will you be revealing Lion-O at the San Diego Comic Con this year? Where can fans find you?

Yes ! Lion-O will be at SDCC. He will be featured prominently in the Sideshow booth. I dont know the booth number off hand but its huge and hard to miss.

Q14) Will the statues be shipped internationally, and could you ballpark shipping costs to Asia, Europe and Canada?

I dont actually sell direct so thats more a question for the retailers who are carrying it. I imagine some will ship internationally and some won’t.

Q15) Any chance that Tigersharks and Silverhawks will be on offer if the ThunderCats line does well?

I would love love love to do both of those ! Obviously Thunder Cats is more popular than both of those so we are first going to see how sales go with Lion-O so we can better judge the expectations of Tigersharks and Silverhawks before moving forward.

Q16) Outside of the ThunderCats what else are you working on at the moment?

Lots of Street Fighter which I have been doing for almost 9 years now. Also, Darkstalkers and certain comic characters that ive always enjoyed such as David Mack’s Kabuki and Billy Tucci’s Shi. I have some new licenses but its a little too earlier to mention what they are.