Mike Germakian, a Father of the ThunderCats – in memorium

Stories of how legends are born often become clouded in truths overlooked “in the name of the deal”, unknown details and half-facts. The beginnings of the ThunderCats property is no different. We as fans know the names of Jules Bass, Arthur Rankin and Tobin “Ted” Wolf as the producers and creator of our favourite cartoon. But there are a number of names we’re not familiar enough with. One in particular played an understated, but pivotal role in the early days of ThunderCats lore. That name is Mike Germakian. 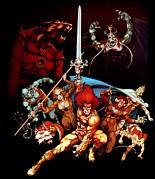 In a search I’ve undertaken to discover the name of the artist who created this iconic art piece [shown left] I had the good fortune to come into contact with Nicole Gray (nee Germakian), daughter of Mike. What Nicole revealed will intrigue you and revise your understanding of Mike’s contribution to the birth of the ThunderCats.

At the conclusion of any episode of ThunderCats, credits role and the famous music kicks in. You’ll notice Mike Germakian is credited for “secondary” character designs. But this was a colossal understatement.

Prior to any mention of the ThunderCats, in the late 70s and early 80s Mike worked with Stan Weston, of GI Joe fame. They formed a company called Leisure Concepts which pitched toy and cartoon ideas to various companies. The company owned and licensed their ideas and partnered with companies like Rankin Bass. Stan Weston was the “deal maker” focusing on the sales side and initial concepts and Mike the “creative guy” brought life to the concepts and articulated visually to tantalize toy executives and production companies.

When Ted Wolf talked to Jules Bass about his idea for a show about part human/part cat people, the idea was shared with Stan Weston and Leisure Concepts was engaged to further develop. This work fell to Mike, who by all rights would more correctly have been called the Lead Conceptual and Design artist for the initial development of show ideas. While many of Mike’s conceptual ideas were changed later in the development stages he was responsible for much of the primary creation of the T-Cats including their names and descriptions of their super powers. Most significantly he developed the first conceptual drawings of the characters and their weapons as well as establishing a rough cut “power- profile” for each.

Much of what Mike created has been lost, destroyed or is slowly fading away in a Warner Brothers storage lot somewhere. But Nicole and Mike’s wife Alice recollect the numerous times Mike would blast down the stairs from his loft-style studio at their home in New Jersey to show off his work; in particular they recall his labors over the latest renditions of ThunderCat designs. Alice and Nicole recall in fact his design of the iconic semi-realistic art piece which is now printed across 80% or more of the ThunderCats merchandise and print materials as well as his development of the logo. Mike, a master at logo development, approached logo work using a favorite truism of his… “Keep it simple.” 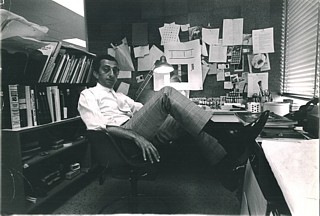 As an artist, Mike worked with a wide range of styles and components. He was a masterful illustrator and graphic designer, but as a hobbyist toiled with oils, watercolors, etching and ceramic pottery-making. He even employed unique textures as seen in his use of metal nails (pictured on this page) in “The Fish.” Instinctively he tended toward strong primary colors and was heavily influenced by the great artist Picasso. His oil (seen on this page) entitled “War Hero” reflects this influence and features the unique usage of burlap depicting bandages and creating a distinctive 3D effect.

Though it can’t be confirmed with absolute certainty, I believe as Alice and Nicole recall, that Mike was central in the creation of the famous promo piece. It seems likely that he created the layout for the piece and then artists in Japan did the final rendering. From everything we’ve seen Mike was a highly-skilled cartoonist, illustrator and concept artist. He could easily have been a commercial success flying solo as an artist; though he chose the unique path of working with his friend and colleague Stan Weston on licensing rights for the characters/concepts they established and Mike drew life into. You’d struggle to find any other artist in the cartoon business who has pulled this off.

Sadly, Mike Germakian passed away at age 74, on October 22, 2001. He is survived by his three children, Victor, Nicole and Margo and his lovely wife Alice. In life, Mike was a charmer and a sportsman. He was a natural athlete; loved volleyball, softball and golf among other sports. His membership in several local softball leagues kept him playing with guys less than half his age and lasted well into his sixties. His magnetic personality and great sense of humor gifted him in life with a richness of friendship and close adoring family ties. Mike was one of those rare people who toiled where his passions lied and truly loved his work; his love of children and his passion for art made his life in the toy industry a lucky win for a talented and good man. He was an alumnus of the School of Visual Arts, returning there to instruct evening classes. Mike continued his work as an artist until his final days. Appropriately we close this dedication to Mike with another of his favorite axioms about life, “Things are not what they seem.” 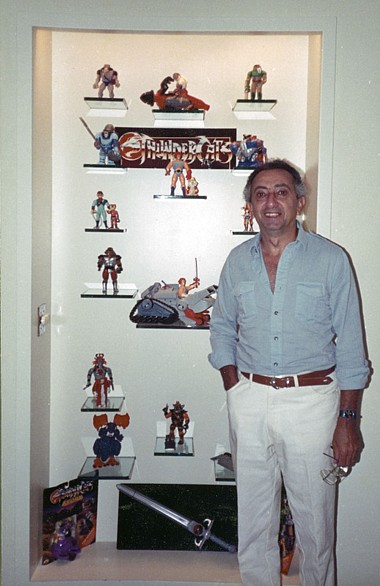